Everything you should know about a Bitcoin ETF 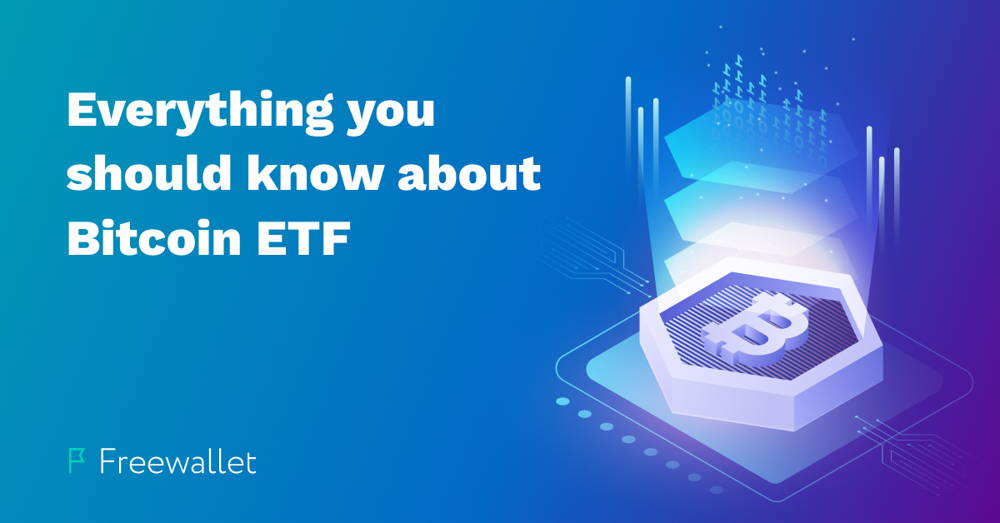 Bitcoin ETF has become a new buzzword in the cryptocurrency media sphere. In recent months, the community has become concerned with two questions: will the launch of a Bitcoin ETF take place and how will this affect the state of the cryptocurrency market? You have probably heard this magical set of words here and there, but don’t have clue what it means. Let’s take a look at it in this article.

What is a Bitcoin ETF?

Before explaining what a Bitcoin ETF is, we should start with the concept of the ETF itself. In a nutshell, an ETF (Exchange Trading Fund) is a variety of certificates of stock, gold or another commodity. It tracks this underlying asset, whether that be Eurobonds or Bitcoin. The price of the security is anchored to the value of the underlying asset.
In terms of a Bitcoin ETF, a company would acquire BTC and issue securities, backed by this coin. People can purchase this certificate and trade it on the stock market. When the cryptocurrency rate changes, the value of the acquired assets also changes. So basically Bitcoin ETF allows you to buy a security for Bitcoin ownership. The price of this certificate will be the same as Bitcoin’s and it can be traded on stock exchanges.

Why is it getting so much attention?

ETF is not a brand new financial tool. It is a common and understandable vehicle in the world of finance, which has been used in financial markets for more than two decades.
The crypto-community believes that a Bitcoin ETF will bring more attention from the whales and big players. It is expected to have a positive effect on the whole crypto industry and Bitcoin’s value in particular. Additionally, the acceptance of a Bitcoin-ETF would signify an important increase in regulation.

What are the critics saying?

Despite the overall positivity regarding a Bitcoin ETF, there are also some skeptics. Popular Bitcoin evangelist Andreas M. Antonopoulos has claimed that cryptocurrency ETFs could trigger a new wave of manipulations, which would negatively affect the prices of digital currencies.
Famous cryptographer and smart-contracts pioneer Nick Szabo voiced concerns regarding the acceptance of a Bitcoin ETF as well. He believes that “it might cause more problems than it's worth”.
The creator of ETH, Vitaly Buterin, has expressed a rather moderate opinion, noting the importance of retail adoption, which would make digital money popular among consumers. He said, “I think there's too much emphasis on BTC/ETH/whatever ETFs, and not enough emphasis on making it easier for people to buy $5 to $100 in cryptocurrency via cards at corner stores. The former is better for pumping price, but the latter is much better for actual adoption.”

The current status of Bitcoin ETFs

Currently, several companies including CBOE, ProShares and VanEck are trying to get approved by SEC to run Bitcoin ETFs. However, the SEC is not willing to approve requests. As it stands now, the Commission has rejected about 10 proposals and not a single application has been successful.
The latest application reviewed by the Commission was done by ProShares to run a ProShares Bitcoin ETF and ProShares Short Bitcoin ETF. In July 2018 the commission turned down a proposal by Gemini exchange of Winklevoss brothers.
Recently, CBOE, along with investment firm VanEck and financial services company SolidX, has re-applied to list a Bitcoin ETF. CBOE withdrew their previous proposal, made on June 2018, because the SEC postponed the deadline for a verdict several times.

Why does the SEC keep saying “No”

The main point of the SEC is that Bitcoin and cryptocurrency are prone to manipulations on the crypto market. “The prices retail investors are seeing are the prices they should rely on, and free from manipulation – not free from volatility, but free from manipulation,” claimed Jay Clayton, chairman of the U.S. SEC.
However, other members of the SEC have shown a more positive attitude towards BTC-ETF. For instance, SEC Commissioner Robert Jackson said: “Eventually, do I think someone will satisfy the standards that we’ve laid out here? I hope so, yes, and I think so”. He noted that companies have started addressing risk and regulatory requirements more seriously and the solution by VanEck and SolidX is more promising than the ETF proposed by the Winklevoss brothers.
Despite the overall enthusiasm, the possibility of a Bitcoin ETF in 2019 is not certain. Both parties are interested in the initiative and it’s only a matter of time before VanEck or someone else will satisfy the SEC’s conditions.