The most popular cryptocurrency references in pop culture 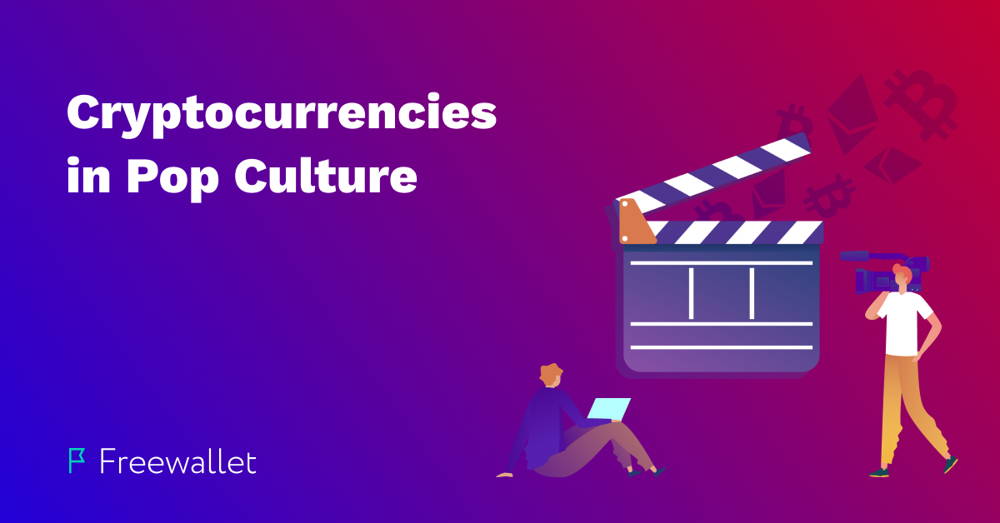 Cryptocurrencies broke on to the scene in 2009 when Bitcoin was created and in the years since has become part of the global zeitgeist. Society at large had no choice but to accept crypto as something that is here to stay – which has resulted in numerous crypto jokes and references in pop culture. Let’s take a look at the most interesting and unusual references to crypto in modern movies, music, comics, etc.

Spiderman Into the Spider-Verse

Everyone loves the Friendly Neighbor Spiderman, right? Well even if you don’t, check this out. The creators of the brand new animated Spiderman flick put in a hilarious easter egg about Bitcoin.

A huge news billboard pokes fun at Bitcoin volatility on its ticker – “Bitcoin hits a new high, Bitcoin hits a new low”. It seems that Bitcoin surges and crashes in the Spiderverse every other second. You gotta have nerves of steel to trade on such a cryptocoaster.

How about some music. Eminem, one of the most popular hip-hop artists of all time not long ago released his latest album Kamikaze. In his track titled “Not Alike” he mentions Bitcoin:

“Remember everybody used to bite nickel, now everybody doing Bitcoin”

The OA on Netflix features not just cryptocurrency but *surprise-surprise* our very own Ethereum Wallet. Yes, the ETH wallet by Freewallet. We were just as surprised as you are. 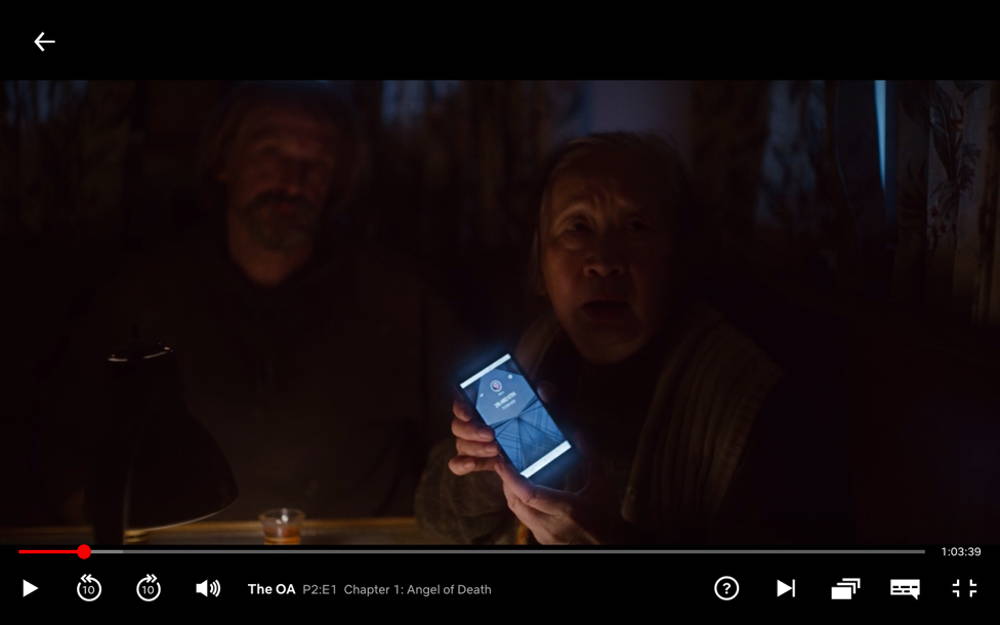 In the first episode of this mystical TV show, an elderly woman asks a detective to find her missing granddaughter. She has no money, only Ethereum, and shows her phone with Freewallet’s Ethereum Wallet displaying her ETH balance. You can find out more about our big-screen appearance in our blog article. 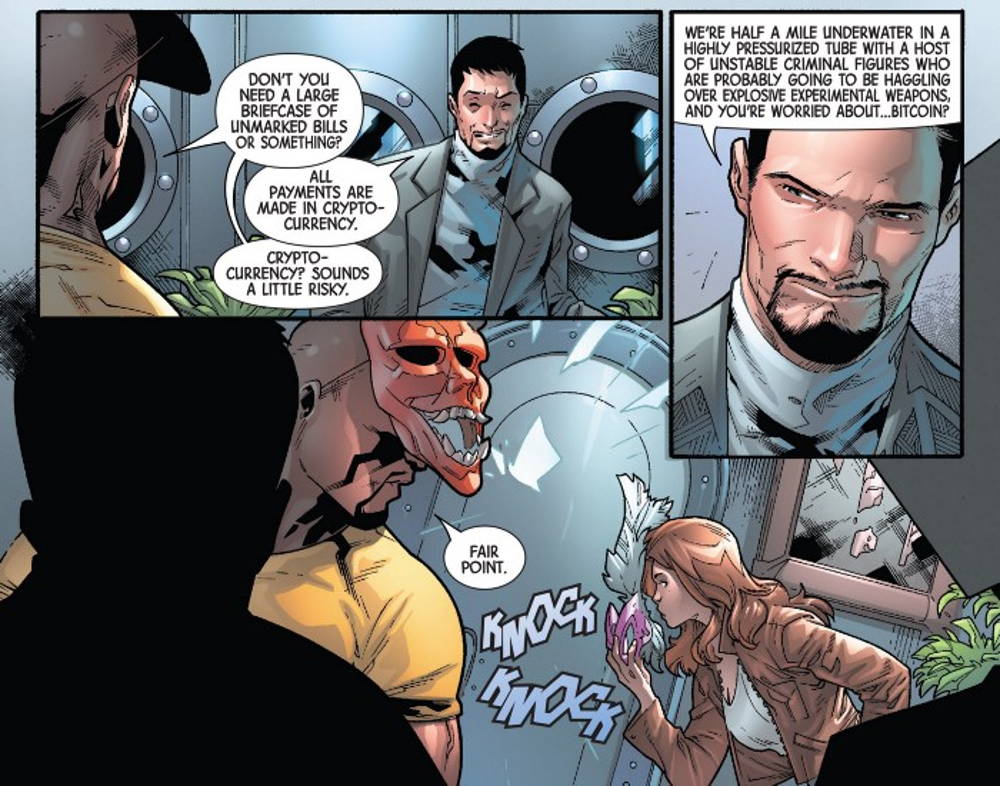 Let’s get back to superheroes. In May 2018, Marvel released Hunt for Wolverine – Adamantium Agenda #1, which mentions crypto. Tony Stark aka Iron Man needs to make a payment with Bitcoins instead of cash.

The Simpsons – Clown in the Dumps episode

Like any pop culture list, this would not be complete without a Simpsons reference! A funny BTC reference was made in the Clown in the Dumps episode. 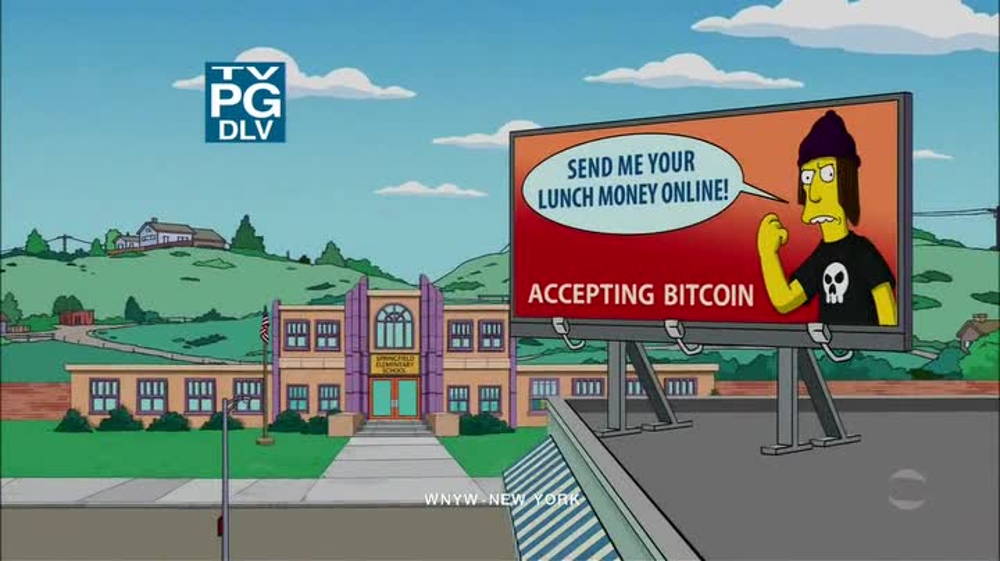 There is a billboard showing an advertisement for the bully James Corky Jones – Send me your lunch money online! – Accepting Bitcoin.” While the reference is in jest, it really highlights how prevalent Bitcoin has become.

Small references and easter eggs not enough for you? Do you think something on the scale of BTC deserves something bigger? What if I were to tell you that there is a whole episode of The Big Bang Theory dedicated to cryptocurrencies. There is. However, it seems that cryptocommunity didn’t like the episode, as the official Reddit of the show was flooded with negative comments. And if you check the thread on r/Bitcoin you will see the same sentiment.