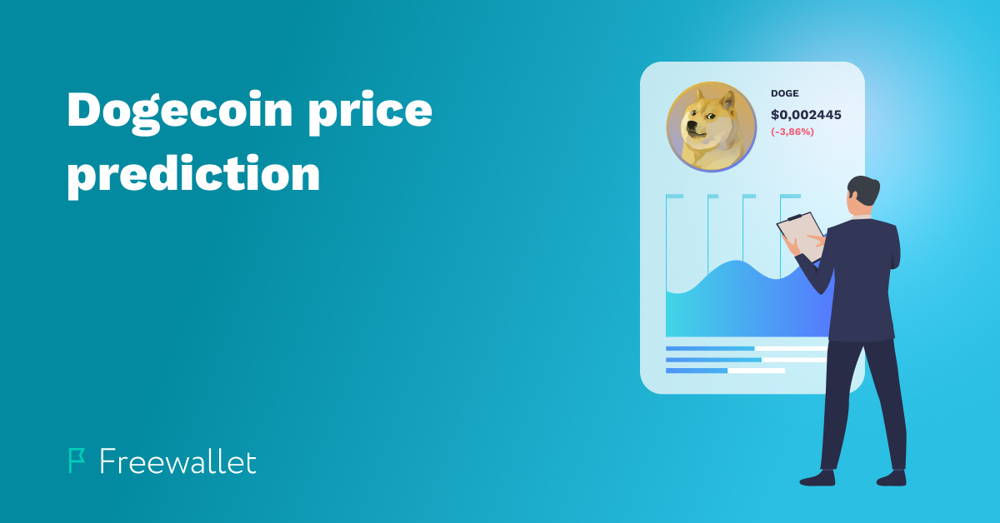 Dogecoin is one of the most fun and loved cryptocurrencies today. Named after the famous meme of the Shiba Inu dog it has attracted the attention of the blockchain community. It started as a simple joke, but the coin took an important place in crypto sphere thanks to its fans and charity activity. Today we will discuss DOGE’s features, the coin’s future and cover some price predictions for 2019 and 2020.

Dogecoin was based on Litecoin and was created in 2013 by Portland programmer Billy Marcus. He wanted to create a fun cryptocurrency that did not share in the controversial history of Bitcoin, in particular, related to the sale of drugs.

He succeeded and DOGE became one of the most loved cryptocurrencies in the community. Named after the Doge Internet meme, the mascot for the coin is the Shiba Inu Japanese dog breed. Unlike other cryptocurrencies, Dogecoin has a fairly fast initial mining period. A new block is created in 1 minute vs the 2.5 minutes it takes with LTC. Today its mining difficulty is adjusted for every block found and the reward is fixed. 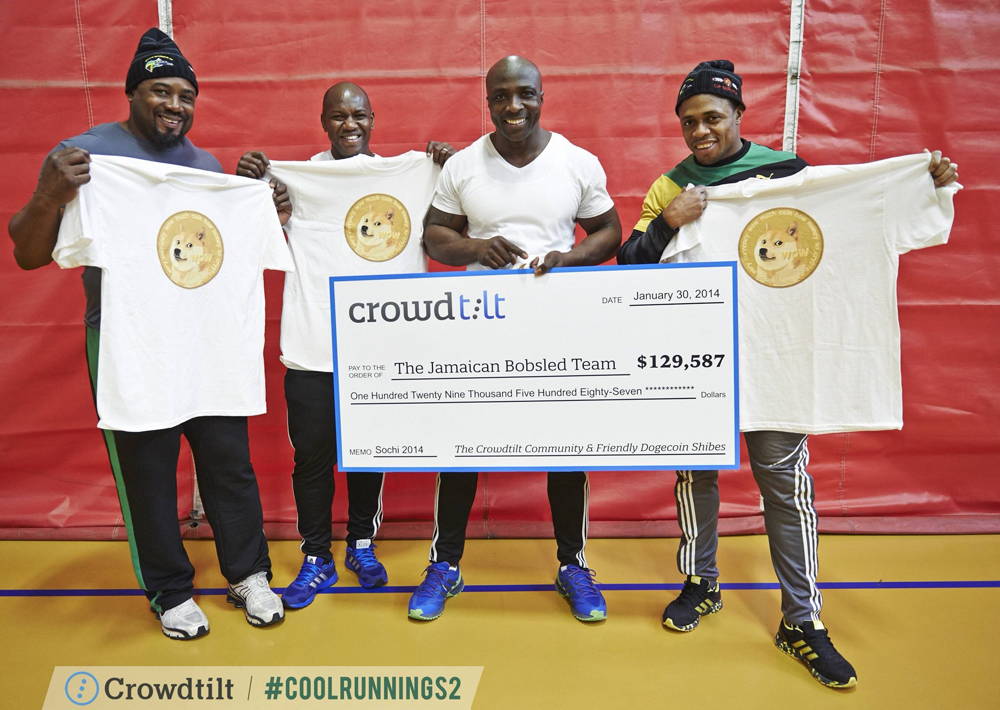 In 2014, the Dogecoin community started a fundraising campaign to help the Jamaican Bobsled Team participate in the Winter Olympics in Sochi. As a result, the team was able to collect $50,000 worth of Doge and visit the Olympic Games. Later the community cooperated with Charity: Water to build a well in the Tana river basin in Kenya and gathered $30,000 worth of DOGE.

The fun and friendly image of Dogecoin has drawn a lot of attention across social media and helped to create an active and vibrant community of blockchain technology fans.

The main features of Dogecoin blockchain

Dogecoin’s features are those of a simple and accessible altcoin. First of all, it is one of the simplest coins to mine. You can mine DOGE right on your PC using a GPU, so you don’t need to buy any expensive equipment. All you need is a Dogecoin Wallet and to install special software. The coin has a fast mining period and with rewards every 60 seconds.

It has a low commission for transactions. No matter what amount you will transfer, the cost of the service is always the same: 1 DOGE. This makes it great for payments and small donations. That’s why it is used for tips for users who are creating interesting and unique content on social media.

Unlike Litecoin, DOGE’s issuance is not limited so over time more coins will appear on the blockchain. This can negatively affect the price of the cryptocurrency due to inflation. There are over 120 bln DOGEs circulating making it a great currency for small payments. 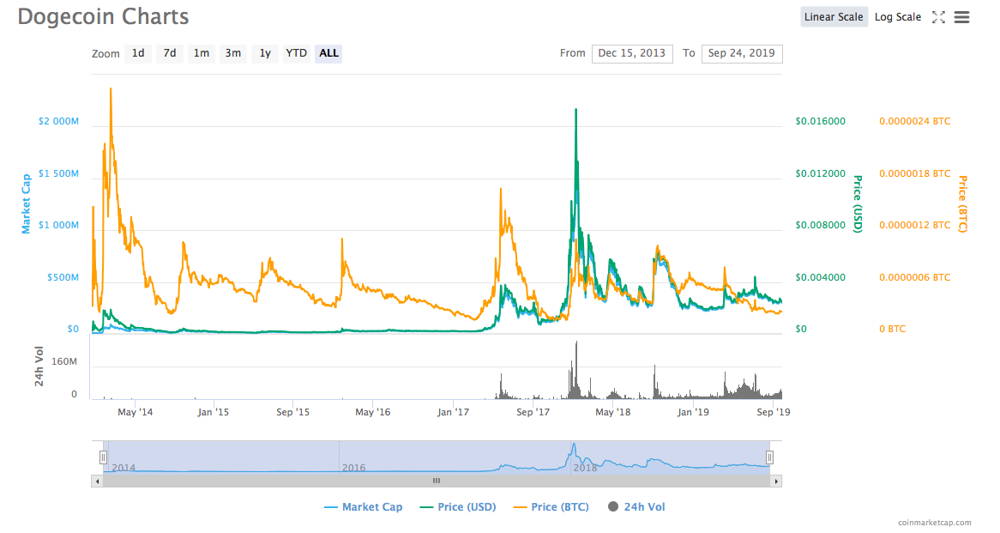 In December 2013, Dogecoin debuted at $0.0006 with a capitalization of $3.5 million. Dogecoin was in an uptrend for a year and quickly doubled.

But 2014 was not as successful for Dogecoin. New cryptocurrencies like NEO, Stellar and Monero appeared on the market, and traders turned their attention to them. The price of DOGE fell to $0.0001.

In 2015, co-founder Jackson Palmer suddenly left the project. He explained that he wanted to focus on the technical aspects of cryptocurrency, and Dogecoin, in his opinion, was transitioning into a vehicle of speculation. With the news the community started talking about the imminent death of DOGE, but this did not happen.

However, until 2017, Dogecoin did not exceed the $0.0002-0.0003 price range. But users bought coins for personal payments, and the altcoin's capitalization was gradually growing.

In the spring of 2017, the value of the coin jumped sharply to $0.003 and continued to grow. At the end of January, Dogecoin reached a historical high of 2 cents, and its capitalization exceeded one billion dollars.

But already at the beginning of 2018, when many Southeast Asain countries started strengthening state control over the cryptocurrency market, altcoins across the board began to fall in price. Dogecoin was not an exception, but, unlike others, quickly recovered and now is sitting around $ 0.002.

The market capitalization of DOGE is $240 million, which puts Dogecoin in 25th place by CoinMarketCap rating. From where it was a year ago, Dogecoin has risen 30 spots, showing that the altcoin is actively developing.

Even though DOGE has come a long way from its somewhat dubious beginnings to become a fairly popular digital currency, some cryptocurrency enthusiasts still ignore it. They are thrown off by the low price of Dogecoin, the unlimited issue of coins and the fact that the developers initially created the cryptocurrency as something of a joke.
Dogecoin’s value is substantially bolstered by its wide use in countries like Bangladesh, the Philippines, Pakistan and Nigeria. These countries suffer from a weak financial system so the locals use DOGE as an alternative to the official fiat currencies. The predictions for the future price of Dogecoin are quite moderate:

Where to store Dogecoin

You can simply buy Bitcoin or Ethereum on Freewallet and then exchange it into Dogecoin right in the interface of the wallet.

If you have any questions regarding Dogecoin cryptocurrency – address them to our support team and they will give you a hand.