All the rumors about the Telegram and Facebook cryptocurrencies. 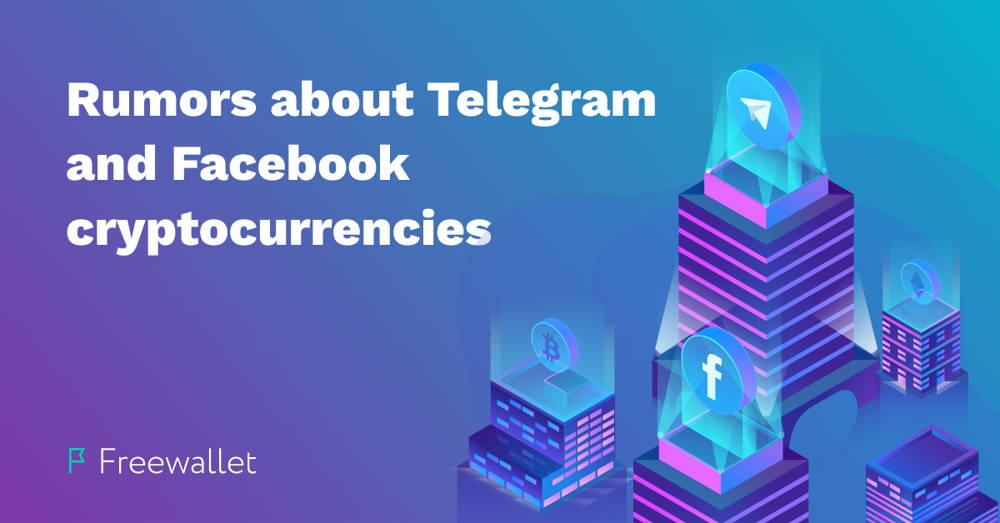 In the near future, social media giant Facebook and messaging app Telegram are going to launch their own cryptocurrencies for internal operations and payments. We’ve gathered all the rumors and known information about GRAM and Facebook’s stablecoin in one place.

Recently, The New York Times reported that Facebook has discussed listing their own coin with a few cryptocurrency exchanges. It is expected that Facebook will issue a stablecoin which will be backed by a pool of several fiat currencies.

Whatsapp will be the testing ground for the cryptocurrency initiative which will be expanded further to Facebook and Instagram, also owned by the social media giant. Facebook’s total audience is over 2 bln. people which makes it a potentially huge platform for payments. Thanks to blockchain technology and its huge audience the Facebook solution might become a strong competitor for Visa and Mastercard payment systems.

Back in 2018, Mark Zuckerberg showed his interest in blockchain technology:
“Encryption and cryptocurrency – they take power from centralized systems and put it back into people's hands. But they come with the risk of being harder to control. I'm interested to go deeper and study the positive and negative aspects of these technologies, and how best to use them in our services.”

During 2018, Facebook was focused on the implementation of blockchain technology into their social network. David Marcus the Vice President of Facebook Messenger was responsible for developing a blockchain strategy for Facebook. He is a former board member of Coinbase so he is totally immersed in the crypto sphere.

In February 2019, Facebook negotiated with several crypto exchanges regarding the listing of their stablecoin. According to well-informed sources, the launch of the new stablecoin is planned for June 2019.
Also, that month it was revealed that Facebook held talks with 12 blockchain start-ups about their possible purchase. At least three of them are known:

Word regarding the launch of a Telegram coin appeared in 2018 when the messenger app announced a private sale of their tokens. As a result, Telegram managed to raise more than $1.7 bln. in a time when ICOs were failing to raise their softcaps (the minimal sums they needed for development).

According to the Block, the blockchain platform is 90% ready and the launch of the Telegram Open Network is expected in the coming months. Telegram has discussed the listing of their coin – GRAM on Asian exchanges Huobi, Binance and OKEx. At the same time, they might sign a few partnerships with ecommerce services and retailers.

Recently a demo video of TON functions was leaked on the internet. Users can access their cryptocurrency account with a special QR code. The tokens can be used to pay for services and games within the messenger and donate GRAM during live streams.

It is expected that as an internal cryptocurrency GRAM will be used in several ways:

In April Telegram announced its cooperation with German fin-tech company Wirecard. They will collaborate to develop joint digital financial services, payments and a banking platform. The details of the partnership have not been disclosed yet, though it is believed that the parties will reveal their results step by step.

According to several media outlets, the release of TON was originally planned for the end of March, but at the time of writing, the platform hasn’t been launched yet. According to leaked papers, the platform should be launched no later than October 31, 2019. Otherwise, all agreements with contributors will be terminated.

By now it seems like Telegram and Facebook are aiming to create their own ecosystems with a marketplace for goods, services, content distribution, etc. These are giant social media platforms with huge audiences and gigabytes of content, which is constantly generated by users, communities, etc. Thousands of companies are presented on each platform, which can offer their goods right there. Cryptocurrencies and blockchain technologies will allow them to get rid of third-party payment processing solutions and create their own.