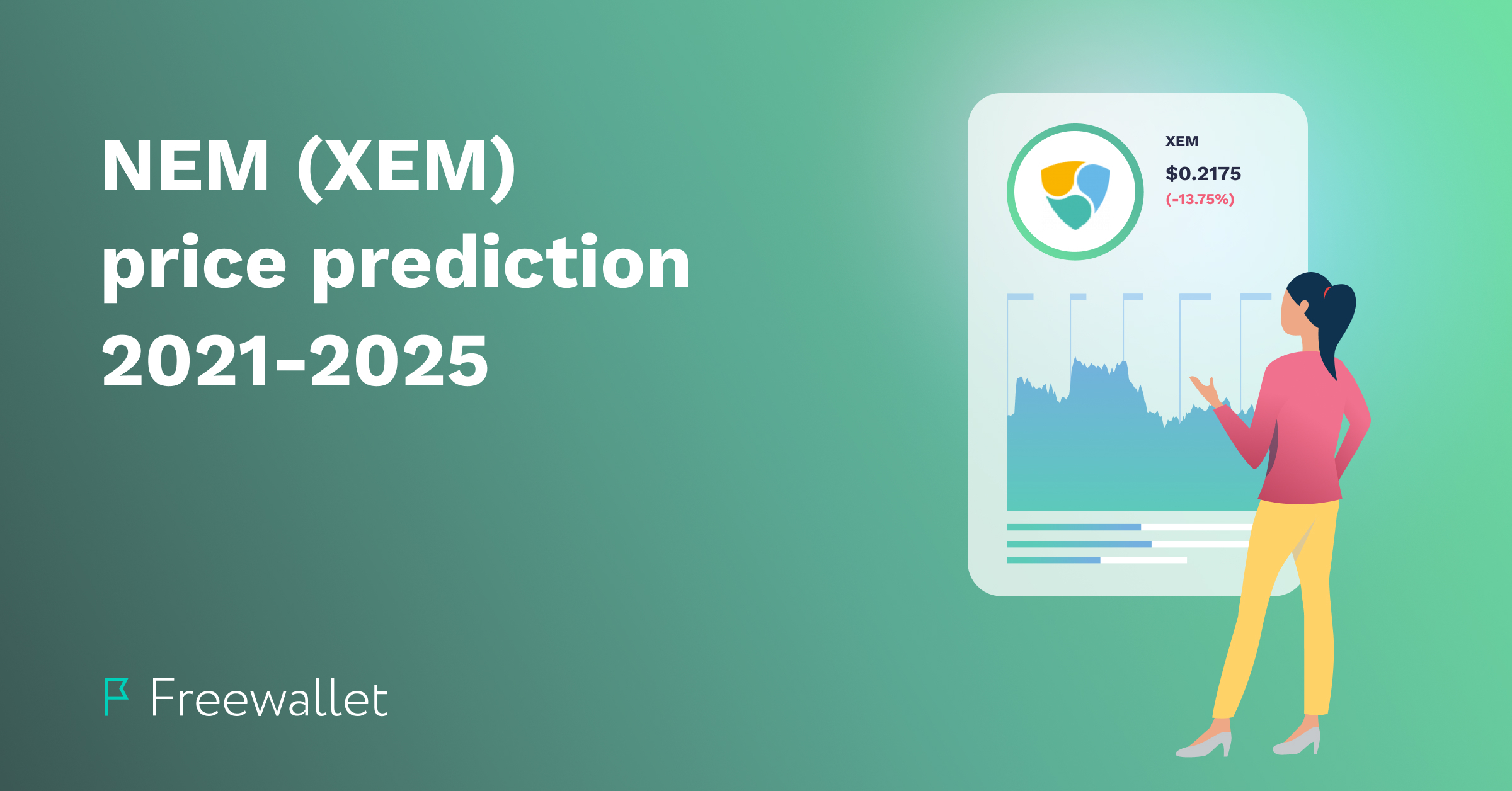 NEM (New Economy Movement) is a project created to develop a more technologically-advanced blockchain. The project doesn’t position itself as an altcoin or just another blockchain, but rather as a Smart Asset Blockchain, a new and improved blockchain. In order to know if this cryptocurrency is a good investment, we have to delve deeper into what makes it stand out, how it works and how the market is responding to its development. This article will try to assess many factors that could impact NEM’s price now and that could do so in the future, all in order to make a probable price forecast for the years 2021-2025.

NEM came to life as a hard fork of NXT in March 2015. It is operated by a non-profit organization called NEM.io Foundation, which is based in Singapore. Nem.io decided to branch out and create its own platform, which is now completely separate from NXT. NEM has its own cryptocurrency, called XEM.

As we mentioned above, NEM strives to make a different and better blockchain, and it tries to achieve that by using proof-of-importance (POI) and harvesting. The proof-of-importance consensus algorithm came as a response to numerous drawbacks of proof-of-work and proof of stake concepts, such as:

Proof-of-importance tackles these issues by giving more “importance” to users that invested more into the NEM system, with realistic “vested” interest.

Harvesting is NEM’s way of “mining”, where users essentially lend their POI score to an already existing supernode.

While it is true that most (if not all) cryptocurrencies are still considered to be in the infancy stage, the use cases of a particular cryptocurrency in the present or the potential of a use case in the future greatly impact its price. NEM’s future price and overall project success rate will greatly depend on whether the NEM team delivers on their promises regarding the cryptocurrency’s development and implementation.

NEM tries to tackle one of the most important problems that regular blockchains face – mainly increasing interoperability between private and public blockchains. More and more companies are starting to invest into blockchain technology, but they all operate in an enclosed environment, which is a big problem. The issue with this is that these companies cannot communicate data or transact between one another. NEM fixes this issue by enabling transfers of any digital asset (including tokens, contracts, files, etc.).

Another important fact about NEM is that, unlike most cryptocurrency projects, it focuses on enterprise blockchain implementation rather than being used as a store of value or a simple means of payment. Its developers are making sure to pack the platform with helpful features, including the full API interface feature.

NEM project believes that it can revolutionize many areas of the economy, including:

NEM’s price history could be divided into two parts:

1. Before the historic crypto sector bull run of late 2017; 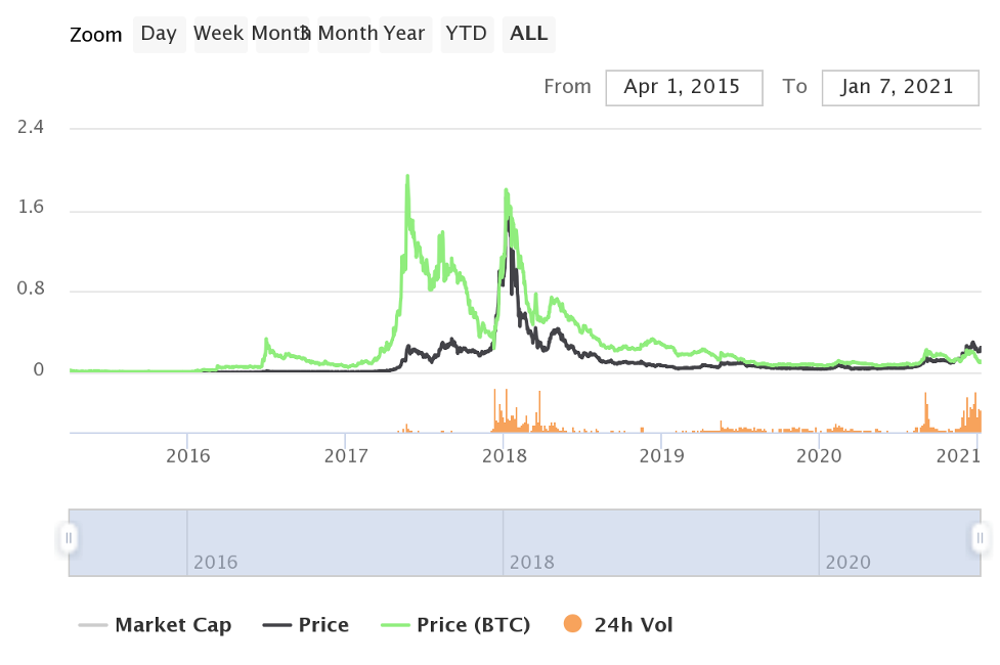 NEM was a sleeping giant from the day it launched on exchanges, up until March 2017, when it picked up some market traction and skyrocketed. Up until then, its price was trading for below $0.01. During its first bull run, NEM managed to increase its price to as much as a little above $0.03. While most were expecting a strong rebound after reaching such highs, the major late 2017 bull market sparked up another bull run with NEM, pushing its price as high as $2. This was also the highest price NEM was ever traded for.

When we turn away from the dollar value of NEM, and try looking at it from a BTC value instead, we can spot two trends in NEM trading. 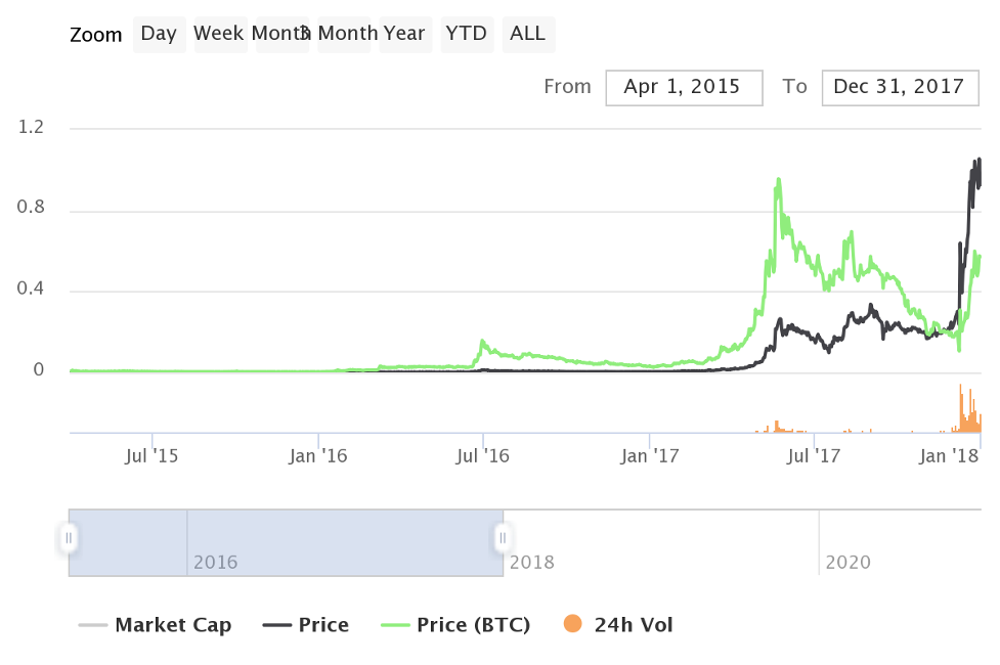 The first one lasted up until the late 2017 bull run, where NEM was mainly unaffected by Bitcoin’s movements and traded independently. If we compare NEM with Bitcoin during that time we can see that the dollar value of NEM increased by 258 times, while BTC’s dollar value increased 14 times during the same period. 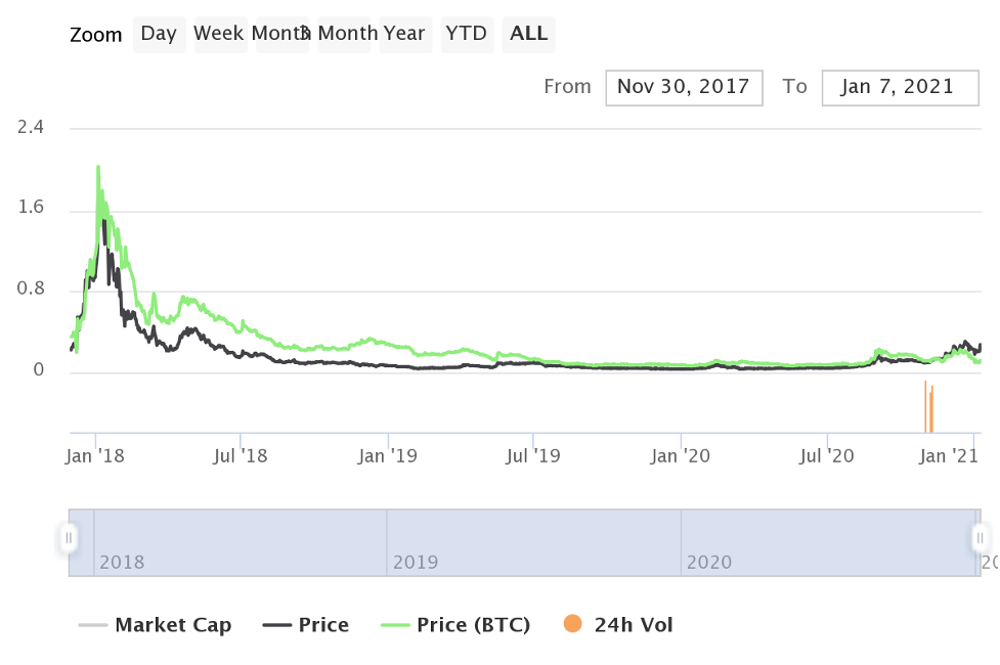 Looking at it from a trading volume perspective, NEM has a lot of space to move up since its volume is currently on historically high levels that it reached when its price was above $1.50.

NEM is currently the 17th largest cryptocurrency by market capitalization, with a market cap of a little over $2 billion and XEM price of $0.23.

NEM’s team is constantly developing new and innovative solutions and implementing them to the system, making this cryptocurrency a potentially great platform for businesses. On top of that, many experts confirm that NEM is a technologically advanced cryptocurrency, which certainly adds to the overall fundamental perspective of the cryptocurrency.

NEM’s price will, if the current trend of high correlation with BTC continues, mostly depend on the market’s movements. The cryptocurrency will need to bring some sensational news regarding technology or adoption to the public if it wants to stand out from the crowd.

It is very difficult to accurately predict the price of any cryptocurrency as the markets are rapidly moving, there are a couple of factors that can play a crucial role in NEM’s future price development:

First off, Bitcoin’s price will inevitably play a major role in NEM’s future price movements, and if NEM doesn’t do anything to stand out from the rest of the market, it will most likely follow market cycles and stay at the same BTC price (which means it will increase or decrease in dollar value as much as BTC does).

However, if the cryptocurrency sees adoption of its blockchain in a slightly more visible way, we may expect it to get back to the top10 cryptocurrencies by market cap. The adoption rate will, of course, depend on the development of the NEM itself as well as the development of its competitors. However, with the dedication and innovation that its team has shown so far, investors should have almost no fear of it being out-teched.

NEM will almost certainly stay correlated to Bitcoin in 2021 as adoption has less time to play a major role. In this case, we can expect NEM to be either slightly outperformed by Bitcoin, or to perform just as good as the largest cryptocurrency by market cap. However, it will most likely not outpace Bitcoin’s gain in short-term price gains.

When it comes to its mid-term price movements, the post-pandemic years will most certainly boost the world economy as everything returns to normal, meaning that people will have more money to invest. If NEM manages to keep up the pace of development it has set now, it’s price has a chance to outperform Bitcoin’s gains, and reach as high as $1.

Most analysts agree that NEM’s price will not reach its previous highs by 2025, even if Bitcoin’s price skyrockets and if NEM sees some adoption. The consensus between analysts states that the price will almost certainly push to the upside, and that NEM is a valuable project as it is, and that it therefore has very limited downside.

While its price outlook is certainly looking positive, even the most positive analysts call for a price of up to $2 by the end of 2025, while more conservative ones state prices of around $1.

How to Buy and store NEM

Holders of NEM have a nice variety of wallets to store the cryptocurrency, with the most prominent one being the official desktop NEM Nano wallet offered by the project’s developers. The NEM Foundation also offers a mobile application that’s available to both Android and iOS users. Besides these wallets, NEM users can also store their cryptocurrency on the aforementioned exchanges, or some of the other less popular wallets that support it. 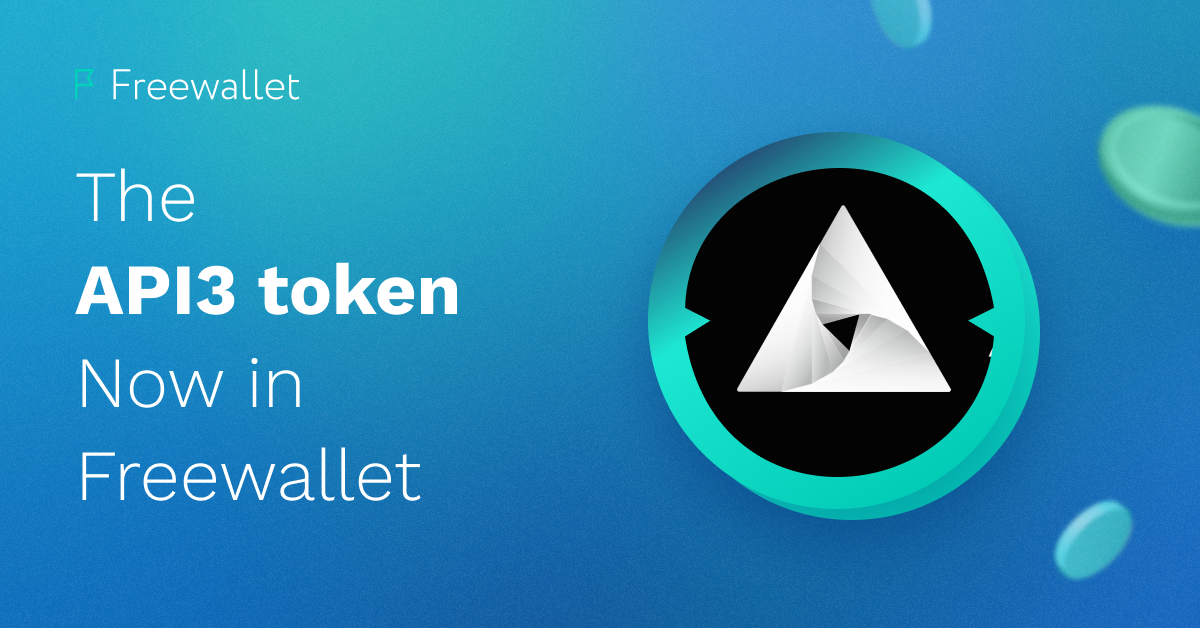 Freewallet has listed API3, the native token of the network for oracle APIs
Feb 18, 2022 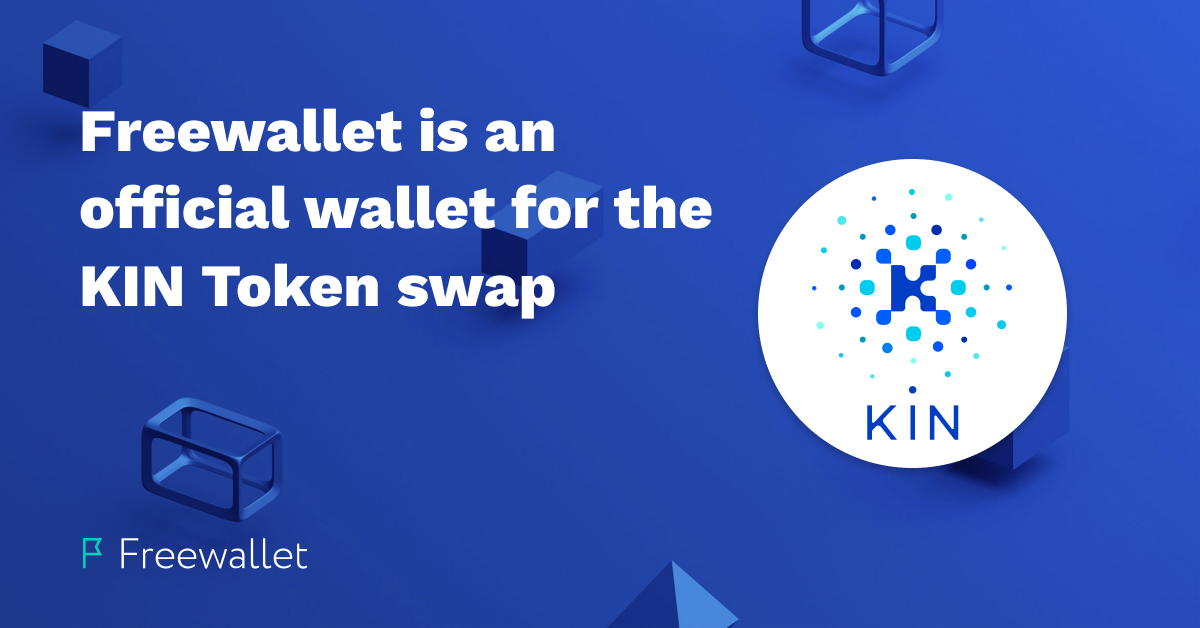 Freewallet is an official wallet for the KIN coin
Mar 13, 2019 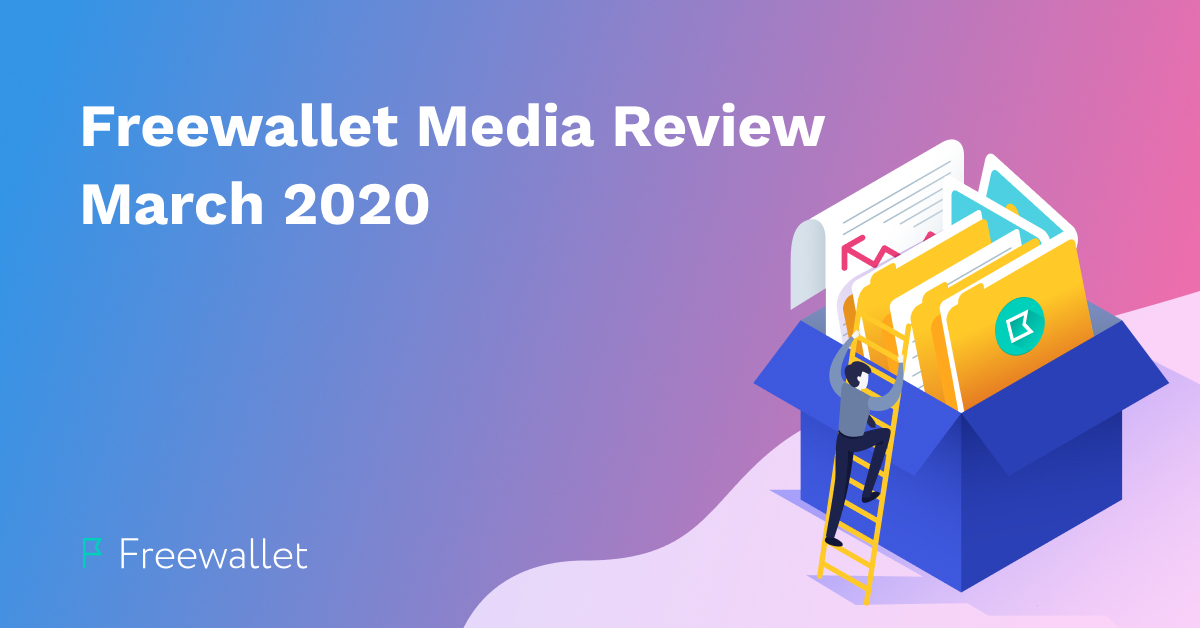 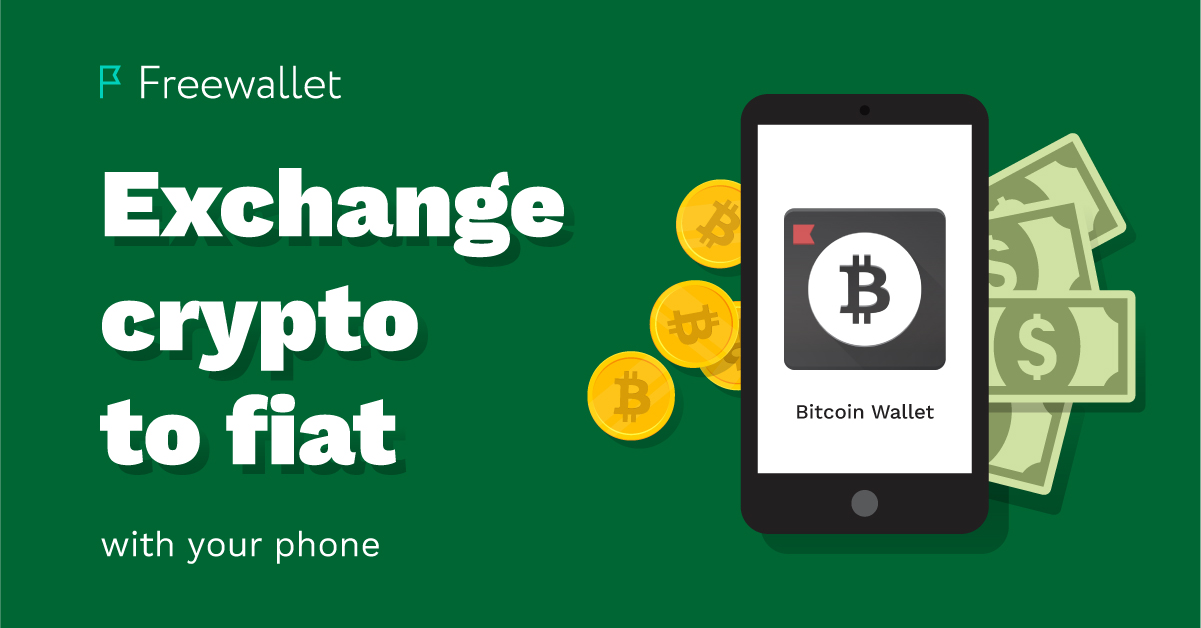 Exchange crypto to fiat with Top Up Phone: now in iOS and Android apps
Jul 13, 2018