The best ASICs to mine cryptocurrency 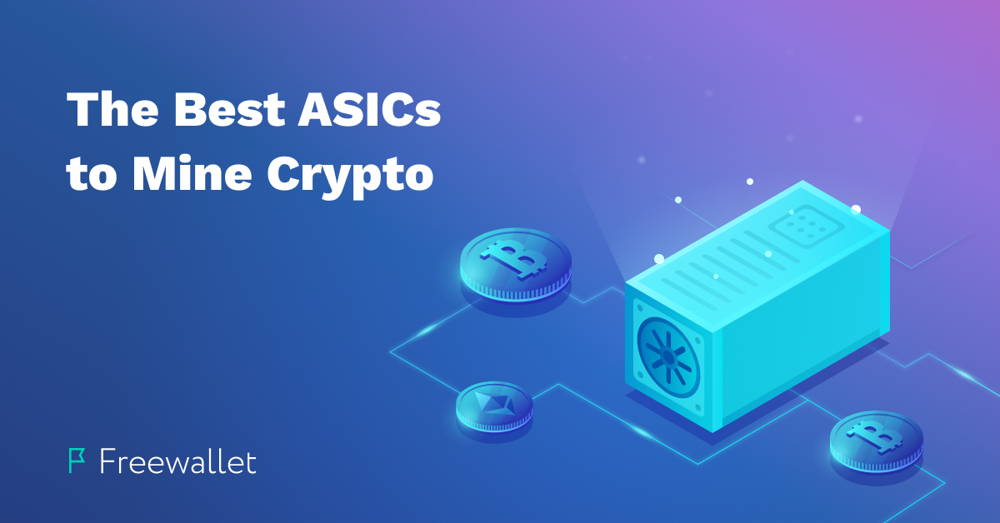 Currently, the only way to mine Bitcoin, Bitcoin Cash and dozens of other coins is to use ASICs specially designed for this purpose. In this article, we will review the most powerful and profitable ASICs for SHA-256, Ethash and Equihash algorithms for today. Finding the right ASICs is not an easy thing at all. Everyone who intends to purchase special mining equipment should evaluate various parameters, for example, energy efficiency, hashrate, price, electricity costs and generated income.

At its core, ASIC is an integrated circuit designed to solve a specific problem, in this case: mining Bitcoin or another cryptocurrency. Its main difference from GPU farms is narrow specialization. Someone may consider this a minus because most ASICs are not able to mine other cryptocurrencies. But such devices can cope with the mining of a specific coin much more efficiently and dozens, or even hundreds of times faster than conventional video cards and processors.

Thanks to ASICs, Bitcoin is mined on an industrial scale. The equipment is installed in areas with stable access to cheap electricity and a well-functioning thermal control system. For single miners, the price of devices might be too high and for most users, this is a serious purchase. Therefore, the choice of ASIC must be approached with all seriousness.

Pros and cons of ASIC miners

Compared to the classic mining farms ASIC miners have a number of advantages:

However, this hardware has serious drawbacks that can scare away some of the users:

Here’s a list of things you need before starting mining with an ASIC:

How to choose ASIC

Power consumption – the more powerful the device, the more electricity it will consume. You should take into account how much energy the hardware will consume in watts, so you’ll be able to calculate your electricity expenditures.

Hash rate – means a number of calculations that the equipment can make per second. The higher the indicator, the higher the efficiency. Comparing several ASICs, you should choose the one that consumes less energy for each hash. Hash rate is measured in Megahashes or Gigahashes or Terahashes per second.

Price – looking for the proper ASIC to miner crypto you should consider that this purchase together with maintenance and electricity costs will not flatten your wallet. But if you are looking for the most efficient miner, be ready for high prices.

Payback period – the average payback period claimed by manufacturers is 7 months, excluding electricity costs. But making a profit can be postponed indefinitely because the use of ordinary household outlets threatens miners with high fines;

One of the most relevant and powerful ASICs by Bitmain today. S17 Pro was released in 2019 in two modifications with 50 and 53 Th/s hashrate. Antminer S17 Pro has three mining modes, offering the highest customization and the ability to switch between settings. The energy efficiency of S17 Pro in “Turbo” mode is 45 J/Th, in normal mode – 39.5 J/Th and in energy-saving – 36 J/Th.

Recently, Bitcoin miners capable of accelerating to 53 Th/s were the most high-performing devices on integrated circuits of this series. But in December, Bitmain released the new version of Antminer with 73Th/s hashrate. The model looks like its predecessor Antminer S17 (59 Th/s), but the new ASIC has more weight and dimensions, as well as improved protection against overheating.

The miner has a built-in high power unit and can be connected to a 220V power supply. To achieve maximum performance, it is necessary to ensure uninterrupted connection of the device to the internet and observe the recommended temperature regime (5/35 °C).

Today it is the most profitable miner for Bitcoin available on the market.

These are very powerful devices even considering the top-grade GeForce GTX 1080 Ti graphics card, which delivers 35.00 MH/s in overclocking. The power consumption of the A10 ETHMaster is unusually small and amounts to 750 W. The noise level of A10 is 75 dB, which is comparable with the noise of 1.5 kW vacuum cleaner.

Bitmain presented to the market a new type of mining equipment – Antminer S19 on February 27. Antminer S19 Pro will be the most cost-effective Bitcoin miner generating daily income of $15. Antminer S19 Pro will use the effective stabilizer APW12, which allows it to achieve higher stability of operation for these types of miners.
The ASIC is a must-have for Bitcoin miners, especially considering that Bitcoin halving will affect the cryptocurrency itself and also the entire digital asset market.

Bitmain Antminer Z11 is a high-performance device for industrial mining based on the Equihash algorithm. The Z11 is three times faster than the previous generation of the Z9. At the same time, its weight is even slightly less than the old ASIC miner. Electricity consumption decreased by 60 per cent compared to Antminer Z9. The manufacturer also promises improved heat dissipation.

At the end of March 2019, the Chinese mining company Innosilicon introduced the super-powerful AS9 miner A9 ++ ZMaster, which is almost three times more productive than the slightly outdated A9 ZMaster. The hash rate of single A9 ++ ZMaster is equivalent to the rate of 18 flagship GTX 1080Ti graphics cards.
It seems that the miner is designed specifically for large enterprises, and not for apartments since the weight, dimensions and most importantly the noise level of 75 dB does not imply the placement of A9 ++ in residential premises.

A new ASIC miner called Toddminer C1 for the Eaglesong algorithm used in the Nervos project (CKB) was presented on the market. The device was made by a new Chinese company, with Toddminer apparently being their first ASIC device. The new ASIC is priced at $ 4100, and shipments will begin in March 2020.

cryptocurrency-guides
Related
The best cryptocurrency to mine in 2020Mar 17, 2020The best coins to GPU mine in 2020Dec 18, 2019
Sidebar
Tags
price-predictionscryptocurrency-guidescryptocurrencyadoptioncryptocurrecy-comparisonsnewshardforkbitcoinethereumbchbkxbsvbtclegalisationdaidgbtronenjeosstellarrippleetfwalletethkinltcpmatrueusdtrxusdcvetardorxlmsecuritymultisig2faxmcfiatminingminergatepartnershipxmobankexxmrlitecoinxrpstablecoinbuydigixpaxospumapaydigibytevechainignisenjin
Oooops! Something went wrong. 😞
Please try again later.
Stay tuned