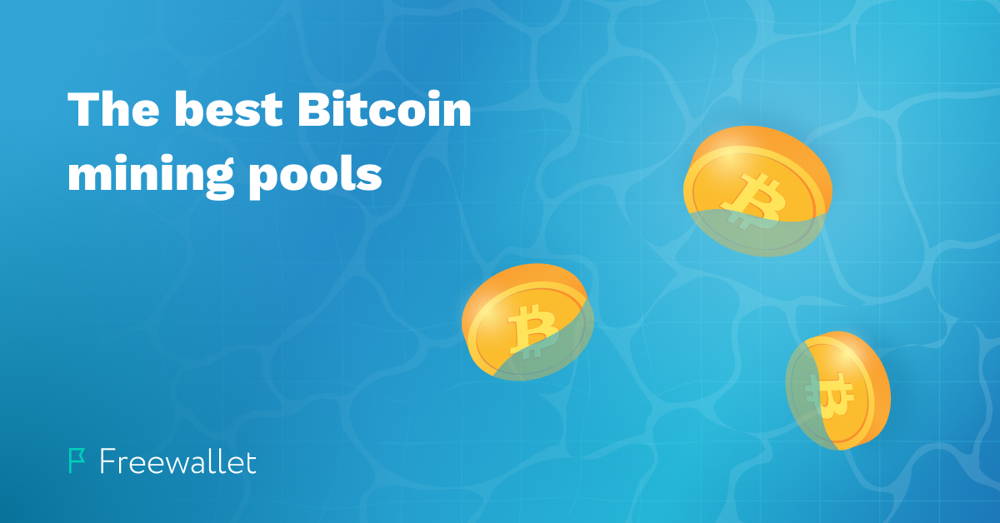 One of the reasons for the popularity of Bitcoin and other cryptocurrencies is that people can get money by mining them. However, the rapid growth in the number of people engaged in mining has led to the fact that solo mining, even using powerful video cards and special ASIC processors, has gradually become less and less effective. As a result, pools have appeared.

What is mining pool

A pool is a platform with specialized software on which miners combine the computing power of their equipment for more efficient mining of a particular cryptocurrency. Mining pools have different reward systems. The most popular pools in 2020 are Poolin, F2Pool, BTC.com, AntPool, ViaBTC.

Why do people need pools? The Bitcoin mining difficulty is so high these days that it is impossible to mine cryptocurrency solo. That’s why miners decided to combine their power and share their reward between the members.

How to join a pool and start to mine

There are two types of mining pools – decentralized and centralized. Today, most of the pools are centralized meaning that the servers are controlled by a single company. Each member shares its hashrate to a pool which combines them to solve a mining problem more effectively and receive a reward. If the pool manages to close a block the reward will be shared between all the members.

Descentalized pools are more rare these days. The main advantage of such services is that they follow the main principle of blockchain. Each miner represents a separate node which participates in mining. The most popular decentralized pools are Eligiusm, P2Pool and BitPenny.

How is the reward distributed?

Back in the days there were dozens of reward payout methods in pools. Double Geometric Method, Equalized Shared Maximum, Pay Per Share, Pay On Target, Proportional etc. Currently, there are only four methods left which are widely used by pools.

PPS is a payment method that involves a fixed payment for each share provided by the user. It is one of the most common models in miner reward distribution pools. The pool determines the cost of each share independently from the calculation of the network complexity, network reward, block time and the pool’s own power.
This method is stable and means that you will always receive a payment no matter if the pool fails to mine a block. However, be ready for high fees of 5-7% as the service tries to mitigate risks.

PPLNS is a payment for the last N shares. Unlike PPS, this system doesn’t provide a fixed reward amount for each share. And if the pool fails to mine a block, the members don’t receive any reward. In this case fees are almost zero because the pool only pays miners what they have mined.
PPLNS reward is calculated proportionally to the amount of shares the miner has done. For all the shares you’ve sent a special coefficient is applied which varies from 0 to 1 with an increase in the sent shares. For example, a pool with PPLNS payment indicates that 1000 shares are taken for calculation. Therefore, your estimated power for receiving a reward will gradually increase from 0 to your maximum hashrate. Only after receiving the first 1000 shares from you, the pool will give the reward for the share in full. The number of shares used to calculate PPLNS is different for all pools and depends heavily on cryptocurrency.

It is a combination of these two methods. The reward is settled according to PPS method and miners are paid a part of the transaction fees based on PPLNS system (but only if the pool finds a block)

It is similar to PPS +, but the commission included in the block is also paid according to the PPS principle, not PPLNS

How to choose a pool

The cryptocurrency mining market is already divided by the largest mining “coalitions”. It is quite logical, considering a simple rule: the more miners use the pool – the larger hashrate and effectiveness of mining. We can start it with a chart of the largest mining pools today:

A relatively young pool appeared in 2017, which became the largest pool just in 3 years. It is a multi-currency pool where you can mine BTC, BCH, BSV, DASH, ZEC, RVN etc. The pool uses three types of reward payout: FPPS, PPLNS, PPS depending on the coin. Mining fees vary from 2% to 4% depending on the coin too. The payout of yesterday earnings is made every day at UTC 2:00-4:00.

F2Pool is one of the oldest mining pools founded in 2013 and still manages to hold its leading positions. Currently, the service supports more than 40 cryptocurrencies including BTC, ZEC, LTC and others.
What makes this platform special? F2Pool is a decentralized platform – it increases trust for advanced crypto enthusiasts. The platform's reputation has never been besmeared. And it has Android and iOS applications to manage your account on a go.

It is a mining pool launched by ASIC producer company Bitmain in 2016. Despite the name the service isn’t limited only to a digital gold. The pool supports BCH, LTC, GRIN, ETH, ETC, DCR, BEAM, CKB and UBTC. BTC.com pays the miners a reward with PPS or FPPS methods.

The service lets users change coins they mine just with a few clicks using a one-button switch feature. You can change one currency to another of the same algorithm without changing a configuatiration of the miner. For instance, you mine BTC and want to change to BCH because the earnining are higher now. So you don’t need to change the mining address and configure your equipment, just press one button in the special menu.

Another creation of Bitmain, which was initially used as a testing ground for their new ASIC equipment and later expanded to a pool leader. Today the service can attract users with a nice interface and features like a mining calculator and cloud mining in solo mode.

Customers can withdraw a reward daily with minimal commision. THe only condition for the withdrawal is the presence of a new block. They use three payment systems: PPS, PPLNS and Solo when a reward goes to one miner in solo mode.

Antpool doesn’t charge fees but keeps about 1 or 2 Bitcoin from a transaction fee reward to itself and doesn't share it with miners.

ViaBTC is a cloud mining pool for popular cryptocurrencies. The main feature of the pool is transaction acceleration service which increases priority of BTC transactions. By the way, this service is paid and free, but it depends on the urgency of processing. The service uses three methods of reward distribution:

Huobi Pool is a large and fast developing multi-currency pool based on Huobi Global exchange. The pool was launched in April 2018 and the first cryptocurrency supported by the platform was Bitcoin. The platform offers two services: PoW Mine Pool and EOS Super Community. The first one is oriented on mining and the second is a platform for DPoS voting in the EOS network.

The service uses FPPS for Bitcoin and Ethereum and PPS for other currencies as a reward distribution method. Currently the transaction fee is about 0.8%

It is the very first mining pool for Bitcoin, and was a pioneer in this mining model. The pool offers only BTC and ZEC mining and has its own payment method called Score. It is based on a scoring hashrate – moving average of the actual hash rate with ramp-up/ramp-down period when you start or stop mining. As for fees the service takes 2% flat fee.

As you already understood it is a pool by one of the biggest exchange platforms OKEx. The service works with 10 cryptocurrencies from Bitcoin to Decred. You can easily swap coins you mine of the same hash function with one click. For example you can start mining BTC instead of BSV or BCH without changing equipment settings.
The pool supports FPPS for Bitcoin, Bitcoin Cash and Bitcoin SV and PPS+ or PPS for other currencies. The fees vary from 2% to 4% and also depend on the mined coin.

cryptocurrency-guides
Related
The best cryptocurrency to mine in 2020Mar 17, 2020The best coins to GPU mine in 2020Dec 18, 2019
Sidebar
Tags
price-predictionscryptocurrency-guidescryptocurrencyadoptioncryptocurrecy-comparisonshardforkbitcoinethereumbchbkxbsvbtclegalisationdaidgbtronenjeosstellarrippleetfwalletethkinltcpmatrueusdtrxusdcvetardorxlmsecuritymultisig2faxmcfiatminingminergatepartnershipxmobankexxmrlitecoinxrpstablecoinbuydigixpaxospumapaydigibytevechainignisenjin
Oooops! Something went wrong. 😞
Please try again later.
Stay tuned