Is Bitcoin a Bubble? 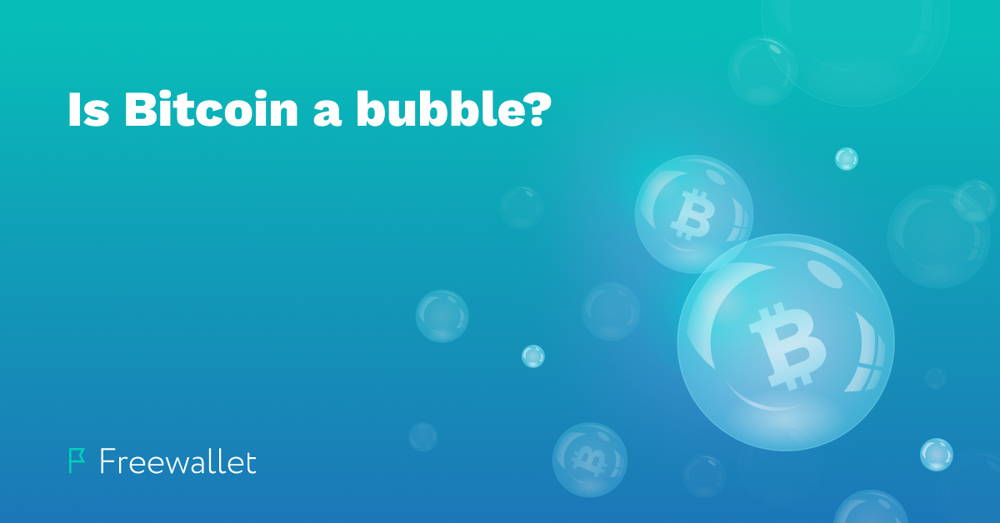 Is Bitcoin a bubble? This has been the most common question ever since the digital gold appeared hit the market. Many people have called cryptocurrency an overhyped trend with no real value. While others strongly believe in the digital gold and have bought in and invested. So who is right in this argument? Freewallet explains the concept of a financial bubble and why bubbles are not as bad as everybody thinks.

What does the bubble mean?

The term bubble is very common in the financial world. It happens when speculators purchase a financial asset at a price above its fundamental value with the expectation of a subsequent capital gain. So, the price of an asset becomes much higher than its real value.

The analogy of it being a bubble is not accidental because the behavior of a hyped financial asset is similar to that of a bubble. The asset accumulates money, inflating extremely fast and one day it bursts, at which point the price drops permanently.

Bubbles have been a common phenomenon since the dawn of the market economy. The stock of internet companies showed enormous highs in 2000 and many analysts and experts claimed that their rate was relevant. The same people talked about real estate prices in the USA and Great Britain in 2006, which led to an economic crisis.

Why do people call Bitcoin a bubble?

In 2013 a lot of scientists started saying that BTC was showing some of the characteristics of a bubble. For example, Australian economist John Quiggin wrote an article called “The Bitcoin Bubble and a Bad Hypothesis” and Warren Buffet recommended investors stay away from BTC. 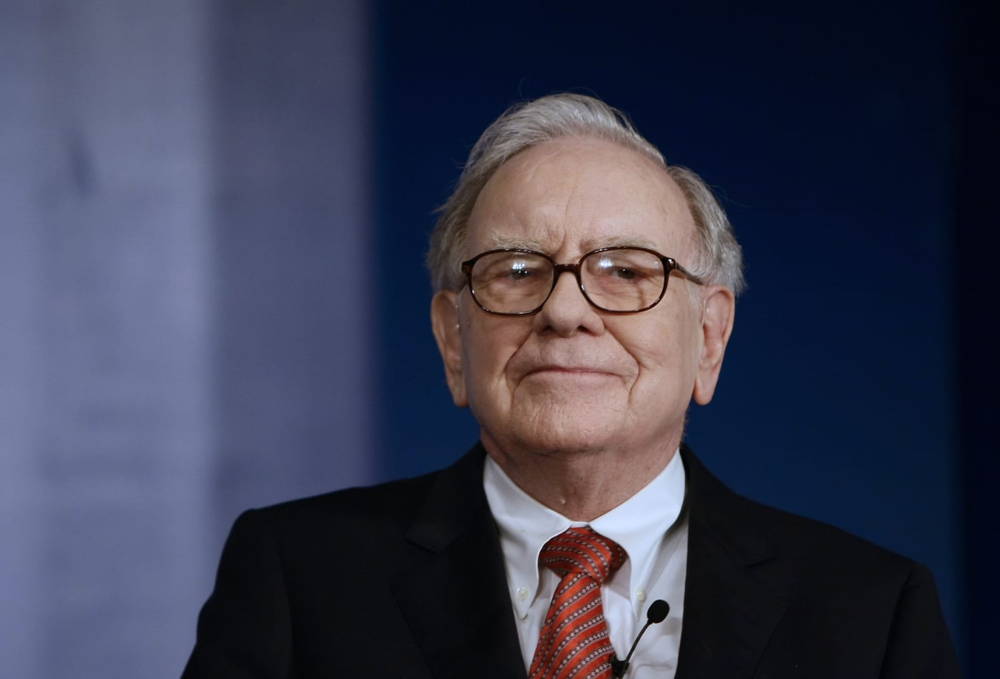 Among the most popular arguments was that the price of Bitcoin and altcoins were based not on the fundamental technology, but the rules of the speculative market and unregulated exchanges with fake volumes. People were buying crypto not because of its technology and ideas but in the hopes of making a fast and easy profit. The digital money didn’t really have many use cases at the time and its price was very high because new people were buying due to FOMO.

Another argument is that Bitcoin has no real value. Fiat currencies have some kind of stability because they are supported by governments and banks. But crypto is backed by nobody, doesn’t have an owner and is not controlled by anyone.

Why did Bitcoin fall in price

In December 2017 Bitcoin could not cope with the price craze and fell from $20000 to $6000. There’s no doubt the market was overheated by newcomers trying to get on the hype train, pumping the price even higher.

Recently, Joost Van der Burgt, a policy advisor at the Dutch National Bank researched and compared BTC price behavior to Google searches. He found out that both charts perfectly correlated with each other until early 2018.

“Every time bitcoin was in the news, be it positive or negative, the price went up accordingly”, van der Burgt said in a phone interview with CNBC on Wednesday. 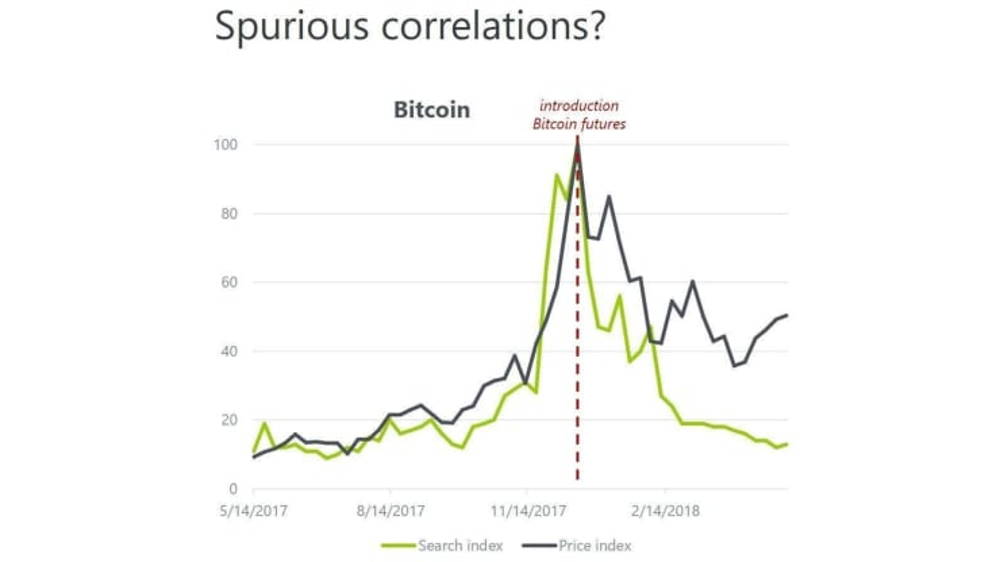 Besides, he noted that the introduction of the Bitcoin futures market also helped to pop the bubble.

“My take on it is that because of the introduction of futures, that might have deflated the bubble before it got to a level where it might burst completely”

This assumption is supported by the research of the San Francisco Federal Reserve.

The thing is that, before the introduction of Bitcoin futures, the market was occupied with optimistic traders and investors who continued to bid higher, helping Bitcoin grow more and more. The other people who didn’t believe in the cryptocurrency so blindly were not represented on the market. Futures helped them to bet on the decline of Bitcoin prices and the bubble popped before accumulating critical mass.

Why is a bubble not that bad?

Some economists claim that bubbles are integral to correctly functioning economics and can motivate a large influx of investments. For example, the dotcom bubble resulted in optic fiber cabling on a global scale and the creation of a worldwide network with huge capacity. That capacity was not actually demanded and a lot of companies went bankrupt because of it but it facilitated economic growth in the years that followed and decreased the price of international communication.

During the collapse of dotcom stocks, Amazon securities lost about 90% of their maximum, that is, even more than Bitcoin lost in 2018 (about 80%). Then, when the market “cleared”, Amazon was able to not only catch up, but also significantly increase in capitalization.

The same situation can be seen with Bitcoin today. For almost 8 years the cryptocurrency sector gradually grew. In 2017 Bitcoin jumped from $2000 to $19000 within 6 months and then drastically collapsed to $6000. That time everyone criticized the digital currency and people started doubting the price of Bitcoin. Some experts even expected the coin to fall to $100. On the results of 2018, the fundamental parameters of Bitcoin have been strengthened: people have contributed $3.12 billion in projects related to the cryptocurrency, which is four times more than in 2017.

More institutional companies such as family offices, hedge funds, pensions, endowments, etc are thinking of adding digital assets to their portfolio (47%), while 22% owns or has already owned cryptocurrencies. Companies are launching regulated exchanges with cryptocurrency futures and ETFs and more people consider Bitcoin a valid store of value.

Is a new bubble coming?

First of all a bubble is formed by a large influx of new players. Since the beginning of 2019, more investors have been coming into the market. But all these new addresses are possibly connected to different people or businesses that own over 1000 BTC in one single address.

The amount of addresses significantly rose at the beginning of 2019 from 1500 to 2100. From this we can theorize that institutional investors and Venture Capitals are getting into crypto. 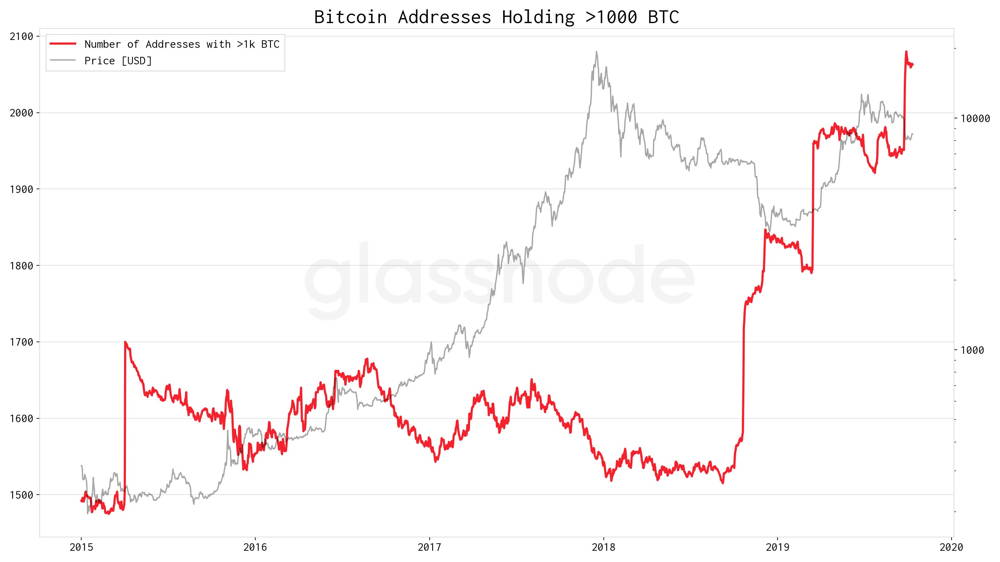 The second factor is a reduction in supply and it is often referred to as Bitcoin halving – an event when the reward for mining becomes two times lower. The next halving is expected in May 2020 and miners will receive 6.25 BTC per block rather than today's 12.5 BTC. Currently, around 1800 BTC are mined daily, so the supply will be reduced to 900 Bitcoin per day.

What will become of the price? Usually each time the reward has reduced, the price of Bitcoin pumped. But previous behavior doesn’t dictate future price, so the anticipated pump might not happen.

If you want to try Bitcoin or other cryptocurrencies start with Freewallet. It is an easy to use cryptocurrency wallet with 150+ coins including BTC, ETH, LTC and many others: