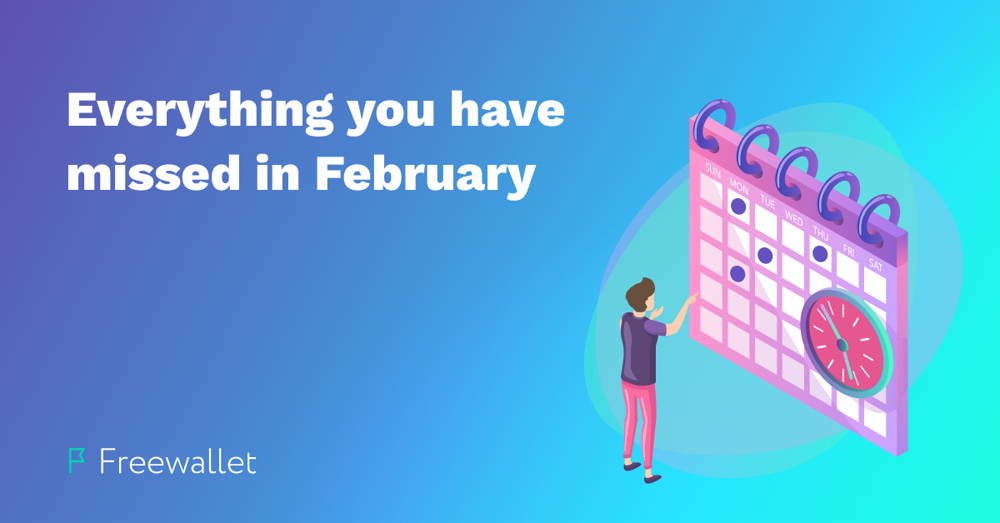 Our latest roundup of the most interesting and fun news in the crypto sphere. An accidental Bitcoin purchase for $20000, new recruits in the stablecoin army, and Bitcoin payments on Twitter. Let’s take a look at everything you missed in February.

The state of Wyoming has recognized cryptocurrency as money

More good cryptocurrency adoption news. The state of Wyoming has passed a bill that recognizes cryptocurrency as money. According to the bill, digital money is categorized into three groups: digital consumer assets, digital securities, and virtual currencies. Any cryptocurrency asset which matches these three categories is recognized as an intangible personal property. The assets are regulated the same as fiat money. Banks can act as qualified custodians of digital assets in accordance with the rules set by the US Securities and Exchange Commission (SEC). The bill came into force on March 1st.

The Litecoin Foundation together with the founders of Beam cryptocurrency are testing the integration of MimbleWimble technology into the Litecoin platform. Currently, the companies are testing the conversion of common Litecoins to LTCs with the new technology and vice versa.
MimbleWimble technology is aimed at improving transaction privacy on the blockchain. It is named after a spell in Harry Potter novels which, when uttered, requires the object of the spell to remain mum on a specific topic.
The protocol doesn’t use addresses familiar to Bitcoin users – instead, two wallets exchange data with each other. This data is visible only to participants of the transaction, and they don’t even have to be online at the same time. Thus, their transaction data, including the size of the transfer, remains hidden and private.

JPMorgan releases its own stablecoin

One of the biggest financial holdings, JPMorgan, has launched a USD-backed stablecoin called JPM coin. It plans to facilitate international payments for financial institutions, thus replacing outdated and slow SWIFT protocol. The coin is currently only a prototype, which will be tested by a small group of institutions in the upcoming months and, later in 2019, expanded to a pilot program.
Despite their similar functions, JPM coin is not a competitor of XRP by Ripple, because it is intended to be used for payments between financial companies, while XRP is positioned as an intermediary between fiat and cryptocurrencies.

Recently, the head of Twitter Jack Dorsey has claimed that Bitcoin is the internet currency of the future and supported the idea of small donations for tweets in Satoshis. Within a few weeks that idea has become reality. Now, Twitter users can make micropayments in BTC with the Lightning Network thanks to the Trippin extension for Chrome and Firefox. After the installation of the plug-in, a lightning bolt icon will appear next to the Like and Retweet buttons. Pushing that button, users can donate for tweets they like. People who also want to get donations for their content on Twitter should install the Trippin extension together with the Lighting wallet.

Probably the worst nightmare for all crypto traders has come true for one unknown trader from Brazil. He bought Bitcoin for an extremely overcharged price and paid 340 Brazilian reals, or $91, for 0.0047 BTC. At this rate, 1 BTC would have cost him the equivalent of $19400.
The most logical and real explanation of what happened is that the trader placed an extremely large market order which “cleaned” the exchange’s order book. Before buying Bitcoin at a price of $19400, he also bought out bids at a price of $16000, $13000 and $10000.
This purchase sets a new record for the Brazilian cryptocurrency market, as the previous maximum rate for Bitcoin on Brazilian stock exchanges came in December 2017 and was recorded at $18900.

The Ethereum hard forks have finally occurred at block number 7280000. The forks contained two upgrades – Constantinople and St. Petersburg. The task of the St. Petersburg fork was to disable the EIP-1283 protocol, which caused security vulnerabilities. These problems were the reason developers postponed the Constantinople upgrade in January. The Constantinople hard fork was set to bring lower transaction fees and increase the speed and efficiency of the Ethereum blockchain.
The Freewallet team thoroughly prepared for the Ethereum hard forks and provided a smooth and trouble-free transaction flow during the upgrade activation period for our customers.