ICO vs STO vs IEO 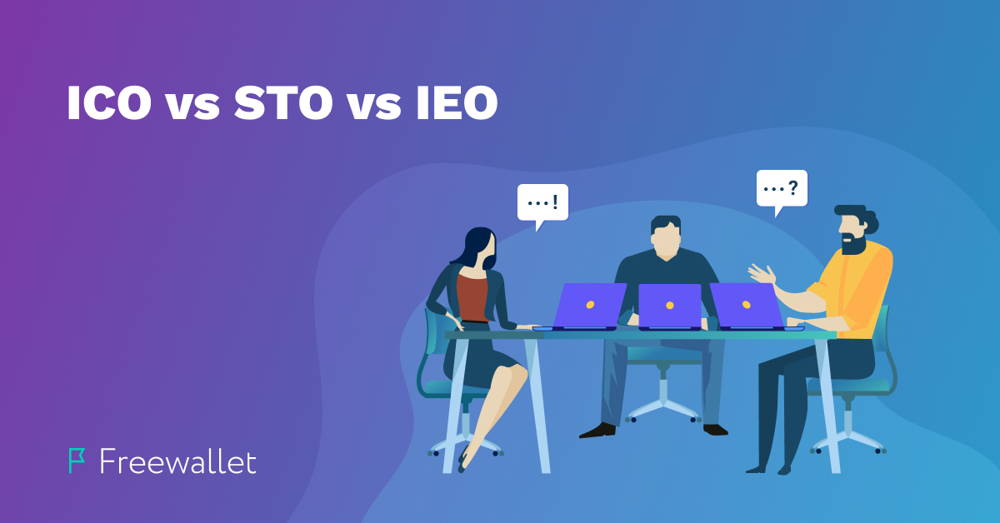 What are ICOs, STOs and IEOs

Companies use ICOs (aka Initial Coin Offerings) to raise money for their projects. They issue and sell new cryptocurrency to people and use the raised money for project development. The holders who bought tokens  expect to profit by selling tokens at a higher price later. The cryptocurrencies exchanged are utility tokens which are used only within the ecosystem of their native project.

Security Token Offerings (STOs) are a new method of fundraising, akin to ICOs, where contributors get security tokens – digital securities which give rights for dividends, shares, equities etc. These tokens are traded on exchanges and fall under United States Securities and Exchange Commission (SEC) and Swiss Financial Market Supervisory Authority (FINMA) regulations.

Initial Exchange Offerings (IEOs) are an alternative to ICOs in which a project’s tokens are initially sold directly on an exchange. Basically, an IEO is a mutated version of an ICO, where the exchange is totally responsible for the fundraising process. The recent BitTorrent token campaign is the most well-known example of IEO.

Why do we need so many of them

ICOs were an alternative to IPOs, which gave companies an easy way to raise money for their projects. ICOs are bureaucracy free and aren’t regulated, so basically, they can be run by anyone as a means of fundraising. This lack of regulation, of course, led to the appearance of many fraudulent, scammy projects and Ponzi schemes.

STOs are solving the biggest problem presented by ICOs – the lack of any guarantees and compensation if a project fails or turns out to be scammy. They are anchored to real securities and token issuers fall under the regulatory requirements of the SEC and FINMA which include financial reporting requirements. These measures ensure that the projects are legitimate and developers won’t disappear with your money.

The same idea applies to IEOs. The ICO sphere ran aground in 2018 due to regulatory uncertainty and an abundance of fake projects. The IEO is an evolved form of token offering where an exchange runs the tokensale itself. The exchange takes upon itself the due diligence of the project, assessing the viability of the products being developed, risks, financial condition, market position, etc. The fact that the trading platform takes reputational risks in the offering increases the trust level for potential token buyers.

What do I need to participate in ICOs, STOs and IEOs

ICOs are very simple to join. You need cryptocurrency, which you then send to the developers. In the case of IEOs, besides crypto, you need an account on the exchange conducting the tokensale.
STOs are more regulated and have more requirements for token buyers. Buyers should be accredited players of the market. This category, according to US law, includes individuals who meet at least one of the following requirements:

Besides these, there are plenty of other minor details important for a token buyer and for a token issuer.

The most popular ICOs, STOs and IEOs

The boom of ICOs came during 2017 when almost every token sale succeeded. The most popular ICOs were held by Ethereum, EOS and NEO which raised millions of dollars in just a few weeks/days/minutes. The latter successful ICO was performed by Telegram for the TON network which garnered $1.7 bln. in a private sale from only a limited circle of token-buyers.
Token holders were privy to huge gains when the price jumped exponentially. Here are a few examples:

In 2018 the interest in this method decreased and most projects couldn’t achieve even the minimum amount required for development. This occurred largely due to scam and fake projects. In the ICO model everything was staked on interpersonal trust which ended up attracting a lot of bad actors.

The alternative to ICOs have become STOs which work within a regulated framework. STOs are not very popular because they are much harder to implement then ICOs and IEOs. In this model a token issuer has to comply with the Securities Act of 1933 including Regulations D, A+ and S. They describe different scenarios where companies can offer security-tokens to potential buyers.

Blockchain Capital was one of the pioneers of STO offerings. It raised $10 mln. within a few hours. Spice VC is a blockchain based venture capital which got $15 mln, during its campaign. NEXO platform has raised $52.5 mln. for the development of a popular platform for cryptocurrency loans.

Unlike ICOs, these STOs didn’t bring huge returns for their buyers. Blockchain Capital had 161% gains, Spice VC buyers got 31% and NEXO has even gone down in value by 20%. Despite, the fact that the STO is part of a different market, NEXO was still affected by the profound cryptocurrency winter.

STOs are trustworthy but the entry level for both companies and token buyers is high. IEOs don’t have these difficulties and platforms can choose only legitimate projects.

The recent BitTorrent token campaign on Binance Launchpad was one of the most anticipated for the crypto community. The hype was so big that Binance couldn’t manage the flow of users and crashed. The campaign was finished in a few minutes. As a result, BitTorrent raised $15 mln. Selling 54 mln. tokens with plans to distributed others via airdrop at a later date.

Currently, there are several active exchanges which perform IEOs: Binance, OKEX, Huobi etc. and more are set to be launched in the future.

The pros and cons of ICOs

The pros and cons of STOs

The pros and cons of IEOs

Don’t know where to store your coins and tokens?

If you are looking for a place to store your cryptocurrencies, take a look at Freewallet.

Feel free to sign up with your Facebook, Google, email or mobile number and try our service.