Top crypto projects to watch in 2019 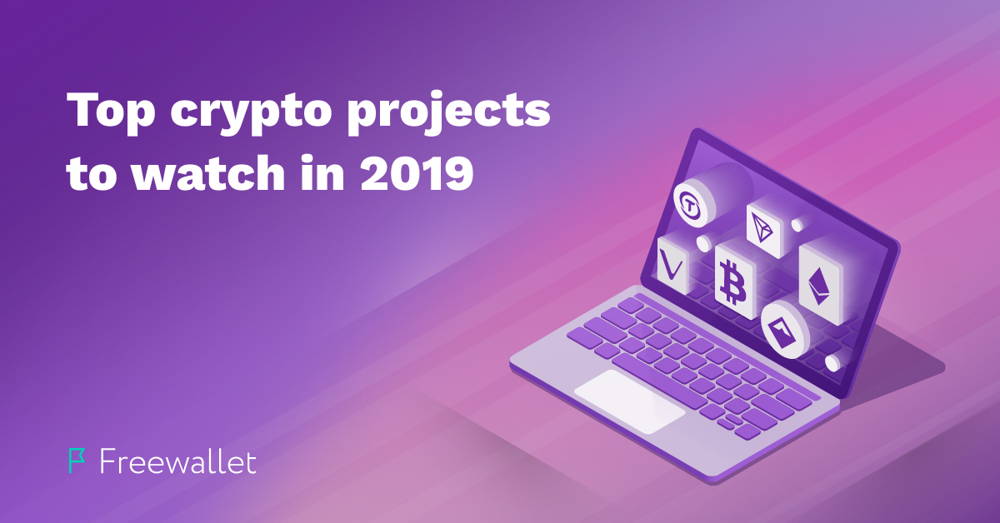 Despite bearish market trends, blockchain development is running at full speed. Let’s take a look at some key market players that have a big impact on the industry and some interesting projects producing great results today.

Of course you should follow all Bitcoin news because, as the most popular coin, Bitcoin works as a litmus test for the whole crypto industry. The largest stock exchanges in the world, NYSE and NASDAQ, are going to launch their own crypto platforms for institutional investors in 2019. This may be a catalyst for the crypto-community. Nobody expects that the price will skyrocket to $20000 again, but this may have a significant effect on Bitcoin and the crypto-industry in general.

It will be very interesting to watch the development of the Ethereum project as the hard fork approaches. ETH will be upgraded from Byzantium to a new improved Constantinople version. The major improvements will be seen in reductions to the costs of work and the simplification of the creation of dApps process. All the changes were part of the road-map and essential for the transition of the network to a PoS algorithm and the implementation of scaling improvement. Users expect that the gas price will decrease and the network will become more stable and 1000 times more scalable. It may draw more interest from developers of decentralized applications. The background of EOS and NEO trying to overtake ETH will make this situation even more interesting to watch.

When we talk about the recent successful milestones of Ripple, we have to start with a RippleNet - a global payment network. Now the network connects 100 financial institutions in 40 countries across 6 continents. RippleNet began providing on-demand liquidity for cross-border payments using the digital asset XRP in 2018.
Besides business development achievements, Ripple strives to educate people about the benefits of the blockchain. The company has launched the University Blockchain Research Initiative allocating over $50 mln. to support academic research and development by the best universities across the globe.
The company is developing by leaps and doesn’t seem to be slowing down in the near future.

At the end of 2018, Tron decided to move into the gaming industry and announced Tron arcade – the company’s $100 mln. grant for game developers. At the beginning of 2019, The Ethergoo created Trongoo and announced their intention to move their game Lordless from Ethereum to Tron. Mixmarvel, the developer of Hyper Dragons for ETH has already created the game Epic Dragons for the Tron blockchain.
The company’s push for blockchain adoption hasn’t ended and they acquired BitTorrent – a p2p file sharing client and plan to launch Project Atlas in Q1 2019. In a nutshell, seeders will be paid in crypto depending on how much resources they will provide.

The end of 2018 could be really called the dawn of stablecoins. During the November market crash, a lot of crypto users took a closer look at them. They had the same benefits as other digital currencies but were not volatile thanks to being pegged to real-world assets. The assets that anchor stable coins range all over the spectrum from the US Dollar to gold. Freewallet supports coins that are backed by gold (Digix), the US Dollar (TrueUSD, USDC, Paxos, and Tether), and the Ethereum blockchain (DAI).

VeChain is a newcomer to Freewallet. The Chinese project develops blockchain solutions for supply chain management, which helps to prevent fraud and counterfeit. A lot of companies showed interest in Vechain in 2018. The project is already supported by major players from various industries like BMW, H&M, DB Schenker, etc. PWC Hong Kong and Singapore showed interest in the project and acquired a minor share of VeChain. Having so much attention from big players makes it worth it to follow the project and check how it will develop in 2019.

Ok, you probably are wondering where you can store all these coins. Take a look at Freewallet – a secure hosted wallet that supports 40+ cryptocurrencies. Feel free to sign up and check it out.