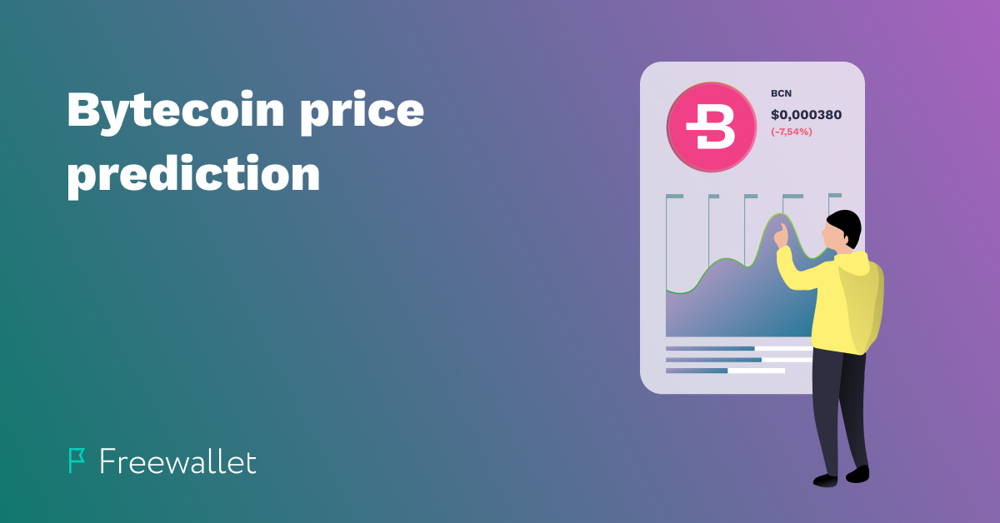 Bytecoin is one of the oldest cryptocurrencies – the “grandfather” of many anonymous digital coins. Although the coin has a long history, things are not going very well for BCN. Freewallet will try to figure out what happened with Bytecoin in our price prediction for 2019, 2020 and 2025.

The Bytecoin story starts in 2012 when an unknown developer known as “amjuarez” decided to create a new cryptocurrency. Unlike over devs, he didn’t want to create a new and improved version of Bitcoin. He didn’t even use its source code, as many other devs did, and wrote his own code from scratch.
Later, more specialists joined him, and together they started working on a project that reflected their personal conception of what the ideal cryptocurrency would be, namely:

The result of their work was the Bytecoin cryptocurrency. It is still unknown why they chose such a name, as many traders confused the coin with Bitcoin. The developers in their turn say that it has nothing to do with BTC and their project doesn’t depend on it.

Bytecoin is based on the unique CryptoNote protocol. It is a predecessor of the CryptoNight protocol, which is used in the Monero cryptocurrency. The main features are:

The main aim of Bytecoin is to enable fast and anonymous payments between people around the globe. By design, coins can be used to pay for goods and services, while not depending on official structures and financial regulators. But for most BCN users, the currency remains mostly just a trading option.

When the coin first appeared in 2012 it cost absolutely nothing. Only in 2014, when the cryptocurrency got listed on a few exchanges did the rate increase to $0.000005. The market capitalization was about $9 mln.

By 2017 the price of BCN remained low but in the second half of the year, the coin started growing. The coin was added to Poloniex and HitBTC and gradually the price achieved $0.001 and a capitalisation of $700 mln.

In winter 2017, when the cryptocurrency market turned bearish, Bytecoin suddenly surged. The price of the digital currency reached the 1 cent mark and market capitalisation was $1 bln. That propelled BCN into the top 30 of cryptocurrencies.

The price jump was possibly triggered by two factors: the fall of the top cryptocurrencies and impressive Bytecoin roadmap presented in February 2017. However, the hype surrounding the cryptocurrency went down and the rate corrected itself. The price fell to the $0.001-0.002 range.

By the end of April, news broke that BCN was going to be added to Binance. This revived interest in the cryptocurrency and the exchange rate began to grow again. On May 8, the coin appeared on the exchange, and literally in a day, its price soared, gaining 114%. Unfortunately, since then the coin has been downtrending and is currently traded for $0.0003.

Bytecoin has a dubious future. Growth looks only possible if widespread adoption occurs. Today it is very unlikely that the coin will become widespread for several reasons.

Currently, it seems that Bytecoin is supported by the work of very few people. They are mostly working on the network to improve anonymity and blockchain features. The lack of real-world applications for this technology has strongly impeded the price growth of BCN.