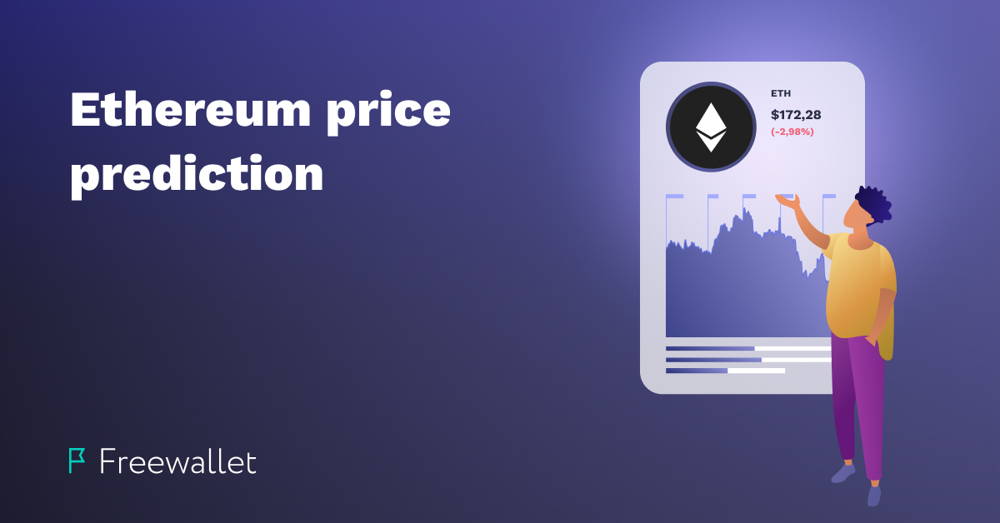 Next year Ethereum is going to release a massive update which will initiate improvements in network speed and scalability. But there’s still a long way to the Ethereum 2.0 blockchain and it will probably take several years to get there. What does the future hold for Ethereum and what will the ETH price be in five years? Learn in our Ethereum price prediction for the next five years from 2020 to 2025.

Ethereum is a platform for launching decentralized open source applications (Decentralized applications, or DApps) using blockchain and smart contracts. DApps are used where it is necessary to transfer stores of digital value – money, documents, registry entries, data, etc. with minimal costs and without the participation of third parties.

The platform has a utility currency: Ethereum or Ether, for short - ETH. It is the "fuel" for creating and deploying DAaps on the Ethereum framework. In addition, ETH can be sometimes used as a means of payment. In this role, the token performs the same function as other cryptocurrencies.

Ethereum value for the industry

Previously, cryptocurrencies were designed to be payment systems that could replace fiat money. Ethereum changed this paradigm and offered something completely new. Ethereum opened up more opportunities for the development of blockchain technology and cryptocurrencies.
The idea behind Ethereum was to create a decentralized global computer with no leader or boss controlling the applications, your data, etc. According to Vitalik Buterin, Ethereum is the new Internet, with all its capabilities and unlimited prospects. 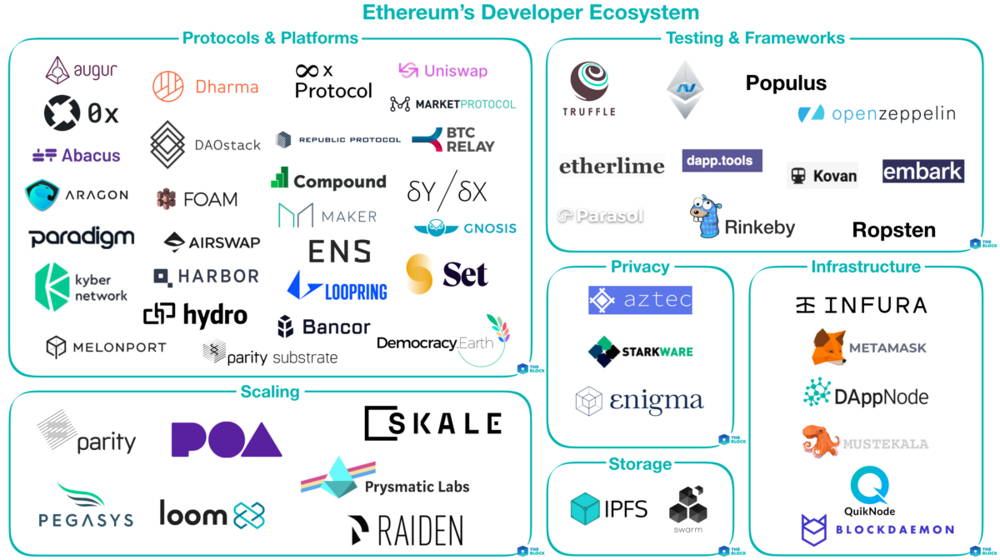 According to Etherscan.io, the first preserved data about the Ethereum price is dated back to 7 August 2015. That day Kraken supported Ethereum and listed on the exchange priced $2.77 per coin. That year the new digital asset experienced sharp price fluctuations and dropped to $0.5 because early contributors were actively selling it.

More and more crypto enthusiasts started learning about Ethereum. A particularly significant contribution to its popularization was made by the Devcon-1 developer conference, which was held from November 9 to 13. It actively discussed the development path of Ethereum in the presence of representatives of IBM, Microsoft and UBS. As a result, the coin settled around $1 price point.

In January 2016, ETH started growing exponentially and hit a price peak in March at $15. The growth was supported by the release of a new protocol version of Homestead. But the next day, the price went down two times lower because of the Ethereum hardfork. For several months Ethereum’s price fluctuated from $8 to $14. In September, the Ledger Nano S hardware wallet added Ethereum to its list of supported assets – thus helping the coin to reach the $15 price.

On September 22, Ethereum suffered from a DDoS attack and the network slowed down. This led to a long descending trend which lasted till December. By the end of 2016, the exchange price of ETH settled around $7-9.

2017 was a bullish year for Ethereum – the coin made a solid run on $23 in the first two months. In March Ethereum price pumped to $53 and then in the next month it rose to $95. Another price push was in June and the coin reached $400. This lasted until mid-November, when the Ethereum price settled in the $270-350 price range.

Meanwhile, during the same time period Bitcoin was gaining momentum and reached its ATH of $20,000. Ethereum followed in Bitcoin’s footsteps and rose to its own high of $1,400 in January 2018. On January 8, the Ethereum price made another leap upward to touch the $1250 mark before falling into a rapid correction. The subsequent developments regarding the price of ETH were mainly reactionary mirroring of that of Bitcoin, which saw it spinning its tires in a bearish trend all year long. As a result, Ethereum ended the year just above $130 price mark.

At the beginning of 2019, Ethereum was traded between $100-140. The first uptrend appeared in April. Ethereum, following the price of Bitcoin, started gradually growing and in June reached $300. However, ETH couldn’t hold these positions and started going back to its previous price marks.

In December 2019 Ethereum started ascending again and reached $280 in the and of February. The growth can be connected with the news regarding the development of Ethereum 2.0. In March it has significantly fell to $113. Currently, the coin is trying to get back to previous positions and costs about $200.

What will drive the future price of ETH

The main issues that people bring up when talking about Ethereum are its low transaction speed and scalability. You probably remember that when Crypto Kitties caused a high overload on the Ethereum network nobody could make a transaction. To solve these problems Buterin plans to create Ethereum 2.0.

The launch of Ethereum 2.0 will be in January 2020 and will follow a roadmap divided into 7 stages. Some of them are still in research status without clear technical specifications. So the full deployment will take several years.

The main features will be implemented in the nearest future and include two important things:

The future Ethereum price will depend on the success of this initiative. The ambitions are big and the risk of failure is high. It is unclear how the market and community will respond to the update and whether the dev team will manage to fulfill their work plan.

Ethereum price prediction for 2020 – 2025 by WalletInvestor

WalletInvestor has a bearish long term forecast for ETH. In 2020 Ethereum will be traded between $110 and $212 – by the end of the year Ethereum price will be about $196. In 2021 ETH will continue falling and will end up costing about $177. For the next two years, the coin will gradually fall. In 2025, the rate of the cryptocurrency will be about $117.

TradingBeasts forecasts a positive future for Ethereum. In 2020 they have the coin will drop from $200 to $150 until December. In 2021 the coin will restore and may reach $236 by the end of the year. For the next two years, Ethereum will experience steady growth and will reach $380 in 2023.

Ethereum price prediction for 2020 – 2025 by DigitalCoinPrice

According to DigitalCoinPrice, Ethereum price will reach $391 in 2020 and then gradually grow to $746 over the next five:

Future price projections for Ethereum are generally pretty positive. They may vary in the specific numbers but most everyone agrees that ETH is a good long-term asset. This is understandable as Ethereum is the second-largest cryptocurrency in the world and has grabbed the attention of Microsoft, IBM, Amazon, etc. Despite some of its competitors being faster and more scalable, Ethereum still manages to hold first place in the amount of Dapps it hosts. The community is waiting for the next update which should improve the network and solve speed and capacity problems.

Ethereum is available on Freewallet: Crypto Wallet for your Android and IOS devices and desktop via the web app.

How to buy Ethereum

There’s plenty of ways to buy Ethereum cryptocurrency. You can purchase ETH:

Who accepts Ethereum as a payment

There are several merchants where you can pay for goods with ETH such as Overstock, eGifter and Digitec Galaxus. Also, there are some shops with Ether payment gateways: Coinpayments, Coingate, Pay with Ether, etc. accepting this cryptocurrency.

Why is Ethereum better than Bitcoin

Ethereum and Bitcoin are the top biggest cryptocurrencies which have been holding their leading positions on the market since they appeared. Ethereum is more developed in terms of transaction speed – it takes only a few seconds to make a money transfer. Besides, Ethereum is a whole platform for decentralized applications which help to raise a lot of cryptocurrency projects. The growth of Ethereum strongly depends on these Applications and the ecosystem it forms. Today more and more businesses choose Ethereum to run their blockchain application or launch their own cryptocurrency.

Will Ethereum go up?

The cryptocurrency market is unpredictable and its behaviour is changing significantly each time. The Ethereum success mostly depends on its product and whether it will manage to solve scalability and transaction speed problems.

When will Ethereum switch to PoS?

At first, the launch of ETH 2.0 was planned in January, later it was postponed to the second quarter 2020. Now the devs expect to move the network to PoS on July 30.