How to mine with a CPU 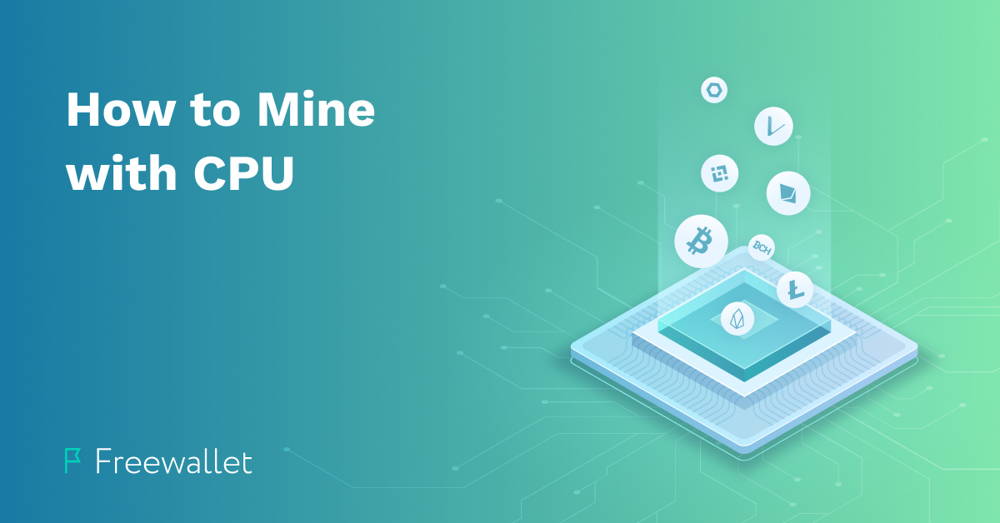 The profitability of mining in 2020 has been significantly reduced but mining continues to be a source of small income. The most popular cryptocurrencies are currently mined with video card rigs and ASICs.

However, there is another kind of mining, which is available to almost every owner of computing equipment – mining on a CPU. This article will help you figure out how to start mining on your processor and how profitable it is.

What is CPU mining

Mining on a CPU is the process of mining cryptocurrency by finding a hash using the power of a central processor (CPU) and assigning it to a block inside the cryptocurrency blockchain.

Initially, mining was launched on a central processor by the creator of Bitcoin – Satoshi Nakamoto. Back in the day, Satoshi managed to mine 1 mln. BTC, when Bitcoin cost only a few cents and mining was very efficient, even on a very average CPU.

What cryptocurrencies I can mine with CPU

In theory, mining on a processor is possible with cryptocurrencies supporting the following algorithms:

Mining coins on a CPU is beneficial if the network difficulty is low. CPU mining of such cryptocurrencies as Bitcoin, Ethereum or Zcash is almost useless even in a pool. With high energy costs, the return on CPU mining will be too low.

You can make a small income from mining on a processor with cryptocurrencies that have been specifically optimized for this. It seems that Monero based on the RandomX algorithm is the only viable option today.

At the moment, there are several types of CPU mining:

How to choose a CPU for mining

The choice of processor for mining should be made taking into account the fact that for maximum performance you need a large amount of high-speed cache and support for AES instructions for cryptographic calculations. All modern processors have this support.

Processors for mining should be the most modern and effective. There are no specific models that are created specifically for mining. The performance of the processors during mining depends on:

From a hashrate point of view, the best solution would be Xeon processors, which are considered the most productive today, but the price of these CPUs is quite high. Another good option is mining on Core i7 or the latest models of the AMD Radeon line.

Choose reliable and popular mining programs and only download them from their official websites, otherwise, you may fall victim to malware which will siphon your computing power off to hackers.

A decent mining client for the CryptoNight algorithm with a wide range of settings and no commission for the developer. The program provides everything needed for mining on a central processor.

This mining client provides standard options for setting up mining on a central processor.
The program takes a commission of 5% from users by default, but it can be changed to 1%. In order for the program to work, you must provide it with administrator access. The XMRig miner also allows you to configure the number of threads for your processor, which allows you to mine more accurately.

How to calculate the profitability of mining on a processor

The profitability of mining depends on the performance of the computer, the difficulty of the network, the current cryptocurrency price, the software being used, the cost of electricity and the mining method. To understand how much you can earn by mining cryptocurrency on the processor, you can use special mining profitability calculators, which are easy to find on the Internet.

NiceHash – a famous mining pool that also provides a mining calculator for coins on 24 algorithms. Simple, intuitive and convenient.

My Crypto Buddy – calculator for cryptocurrency mining with the ability to calculate the difficulty of mining and commissions from large mining pools. All this data is provided to the user in an advanced report.

Once they’ve filled out these fields, users will get the necessary information on the profitability of mining in their situation.

Is it possible to mine Bitcoin with a CPU?

Theoretically, Bitcoin can be mined on a processor. But at present, the difficulty of Bitcoin mining has grown so much that even specialized equipment does not bring significant income and mining of Bitcoins on a CPU is only really carried out for academic purposes.

The profitability of mining Zcash on a processor

As in the case of Bitcoin, ZCash mining on a processor is theoretically possible, but it is useless and a waste of resources.

Dogecoin (DOGE) is quite possible to mine if a user has several central processors on the level of the Intel CPU i9-9980XE and is connected to a mining pool.

Pros and Cons of CPU mining

It is extremely unprofitable to mine cryptocurrency on a processor, but you can use CPU mining in addition to GPU mining. Consider equipment wear, electricity consumption and other costs. For more productive mining, it is advised to join a pool. Pay attention to fees and select the most profitable mining pool for you in order to succeed.

cryptocurrency-guides
Related
How to mine Monero with CPU and GPUJul 06, 2020The best coins to GPU mine in 2020Dec 18, 2019
Sidebar
Tags
price-predictionscryptocurrency-guidescryptocurrencyadoptioncryptocurrecy-comparisonsnewshardforkbitcoinethereumbchbkxbsvbtclegalisationdaidgbtronenjeosstellarrippleetfwalletethkinltcpmatrueusdtrxusdcvetardorxlmsecuritymultisig2faxmcfiatminingminergatepartnershipxmobankexxmrlitecoinxrpstablecoinbuydigixpaxospumapaydigibytevechainignisenjingiftcards
Oooops! Something went wrong. 😞
Please try again later.
Stay tuned