Ripple (XRP) vs Bitcoin – What is the Difference? 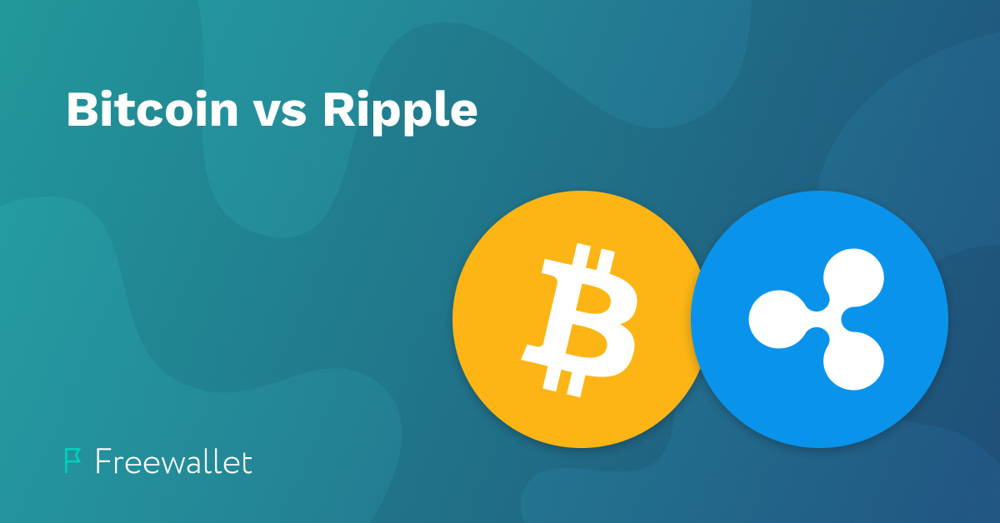 Although Ripple has some characteristics similar to Bitcoin, this is a completely different project. It uses cryptography to protect transactions, it does not have a public blockchain.

Instead, a network of nodes is used that verify transactions, but not necessarily anonymous P2Ps, many of which are owned by banks and financial institutions.

In this article we will compare these two different currencies and explain their technology, unique features and price behavior.

Ripple is considered a bit weird relative to other cryptocurrencies, because it does not have a public blockchain. The XRP Ledger network runs on an integrated blockchain, it does not use proof of work, and its mechanics are almost unknown.
Ripple was developed as a system for transferring assets with the goal of making instant and secure transactions between network members. The idea was that you can transfer any digital values, including fiat currencies, cryptocurrencies, goods, even loyalty points and mobile loans. At a late stage of development, a proprietary token was added, which can be used for any transactions on the network.

Ripple, of course, does not share the original values ​​of Bitcoin and other cryptocurrencies, but thanks to this, it has become attractive to banks, financial intermediaries and state investors looking for solutions for digital payments. Ripple received huge funding to develop its protocol. Among the early investors are such giants of the financial industry as Andreessen Horowitz, Pantera Capital, Google Ventures, IDG Capital Partners and Santander InnoVentures.

While Ripple is centralized, Bitcoin has a decentralized blockchain. Bitcoin does not have a common server and is stored in the computers of millions of people around the world. Each member of the Network has a copy of the blockchain with a history of all transactions (mining operations, purchase, sale and transfer of virtual coins). Each user has access to the database and the specified information.

When a new block is created, information is synchronized, and copies on the computers of participants are updated. Thanks to this decentralization, it is impossible to replace data and deceive the network. Each Bitcoin block contains data about itself, as well as about the previous node, which confirms the integrity and validity of the chain. To make changes to the blockchain, you will have to adjust the entire blockchain, which is stored on millions of PCs worldwide.

Comparing Ripple and Bitcoin, special attention should be paid to mining. Bitcoin has such an opportunity. The extraction process is the execution of calculations - the selection of numerical values ​​to search for the desired hash. Bitcoin mining is carried out using farms on the ASIC miners, which are increasingly being used due to the increased complexity of cryptocurrency mining. Regardless of the number of miners, it takes 10 minutes to mine the block, and the reward is 12.5 BTC.

Unlike Bitcoin, Ripple tokens have already been issued in the amount of about 100 billion coins and there is no need for production. You can get XRP in several ways - by exchanging or buying on the exchange.

XRP started at $0.0058 and the rate was almost the same for several years. In March-April 2017 the coin pumped for the first time and grew to $0.03. The next month Ripple crypto managed to achieve $0.2 in May, because the news that the third largest bank in the world Bank of Tokyo-Mitsubishi joined Ripple’s network.

For several months the exchange rate was fluctuating between $0.18 and $0.3 with some pumps here and there. Another XRP bull run started with the growth of Bitcoin in the end of 2017. During that period Ripple’s crypto reached $3 per coin in January and then dropped to $1. For one month the currency managed to stay one the same price position and started falling. Like many other coins on the market, XRP follows the price movement of Bitcoin too.

In September, Ripple announced the launch of xRapid – a platform for payment providers and financial institutions. It led to XRP price growth and at some point the coin managed to move Ethereum from the second place on CMC. From two months the coin was traded between $0.5 and $0.39 and then fell to $0.28 in December 2018. For almost half a year the rate of XRP was around $0.3. In April 2019 the market started restoring and the coin jumped to 0.4-0.45 in May. However, it was followed by correction and today XRP is traded for around $0.3.

Bitcoin has a long history and experienced 4 cycles during which the price rose to the new highs and fell again. Each next cycle the starting price of BTC was higher than it was before.

The first cycle (autumn 2010 – summer 2011) Bitcoin started at $0.06 and then grew to $36. When it dropped to $2 per coin people started calling it a bubble and a Ponzi Scheme. But as you can see the rate in the end of the period is much higher than the price in the beginning.

The same price movements repeated three times more and the last one happened in 2015-2017. That time the coin managed to jump to $20000 before dropping to $5000 for over a year.

The community is expecting that Bitcoin halving in 2020 will lead to another significant price growth. Why do they think so? Because each time a BTC halving event has occurred, the price of BTC went higher.