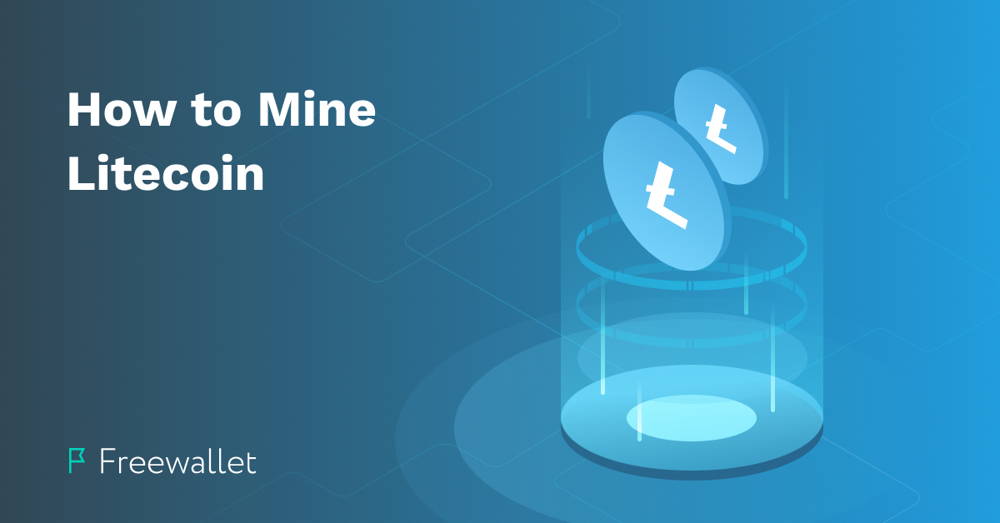 Today, Litecoin is among the top 10 cryptocurrencies based on market capitalization. The digital coin is derived from Bitcoin and one of the first cryptocurrencies to pop up in its wake. Despite its origin, Litecoin is entirely different from the “virtual gold” and was designed to solve a number of its problems. LTC is among the major coins that miners are drawn to. In this article, we will cover how to mine Litecoin, what equipment is required, and the profitability of Litecoin mining.

Litecoin appeared on the market in 2011 and was developed by Charlie Lee, an ex-Google employee. The cryptocurrency is built on the BTC protocol but uses a different hashing algorithm. At its core, Litecoin is based on the Proof-of-Work consensus algorithm and the Scrypt mining algorithm, while BTC uses SHA-256.

The maximum supply of Litecoin is 84 million. That figure marks another of the coin’s differences from Bitcoin, which can issue a maximum of 21 million coins. The Litecoin reward halves every 840,000 blocks (four times more often than Bitcoin), and the transaction fee is 0.02 LTC.

In a nutshell Bitcoin and Litecoin differ on the following points:

Litecoin was the very first cryptocurrency that integrated the SegWit software algorithm. Thus, they solved the issue of network scaling relevant for Bitcoin. Bitcoin has a block size of 1 megabyte which significantly limits its transaction speed. So, the Litecoin network has a much higher capacity than its predecessor, Bitcoin.

How to mine Litecoin

Currently, Litecoin mining is rewarded with 12.5 LTC, and the reward decreases approximately every four years. Here are a few important nuances to know about Litecoin mining:

There are several methods to mine Litecoin today:

Starting to mine LTC

Mining solo is an attractive option because you earn more by not sharing your reward with others. But don’t be fooled by this appeal, especially if you’re new to mining. Mining in pools is more practical for beginners, as you combine your power with others and discover blocks more frequently. If you are working alone, you may find a block only once a year, but mining in groups increases your chances.

When it comes to Litecoin hardware, there are two undisputable leaders:

You can also assemble a GPU mining rig, but don’t expect to make much profit. The times when people could earn with GPU mining are gone. But it is a great way to familiarize yourself with the process, and avoid spending thousands of dollars on an occupation that doesn’t interest you.

With fiat currencies, you have to have a real place to store money. It can be a bank or just a physical wallet. Cryptocurrencies are similar in that you need a wallet to store the altcoins. If you don’t have one, here are our recommendations:

Looking for the right mining pool, you should find a good service you can trust. Total hashrate, number of workers, distribution and other factors can significantly affect your overall earnings:

Now that we’ve covered the main points to consider and got an idea what to look for, here’s a list of mining pools providing LTC mining:

Create an account and configure your mining equipment and software according to the setup of the pool. All the configurations are available on the pool’s official website. Don’t forget to fill in your Litecoin address to receive payouts.

Most beginners wonder whether they can earn with Litecoin mining. Let’s get to calculations to understand what it takes to mine Litecoin today. We will choose the most powerful ASIC Innosilicon A6+ LTC Master with 2.2 GH/s and 2100 W power consumption.

Let’s imagine you have really cheap electricity that costs $0.03 per kWh. According to these estimations, you’ll get the following:

As you can see, theoretically, you can earn more than $300 in one year. However, we didn’t include pool fees, and the cost of the ASIC miner itself in the calculations.

You are free to draw your conclusions because there’s no answer to this question. The price of Litecoin could go up astronomically and the coin become the next big thing, but at the same time, it could end up being a total waste of money if the price drops.

How long does it take to mine a Litecoin

Litecoin boasts a faster block generation than Bitcoin. It requires only 2.5 minutes to mine a block. But with today’s difficulty rate of 9308759, the average miner will mine 1 Litecoin in 2.5 weeks approximately, using Innosilicon A6+ LTC Master.

How hard is it to mine Litecoin

The mining difficulty of Litecoin adjusts every 84 hours. You can check the up-to-date information on coinwarz: 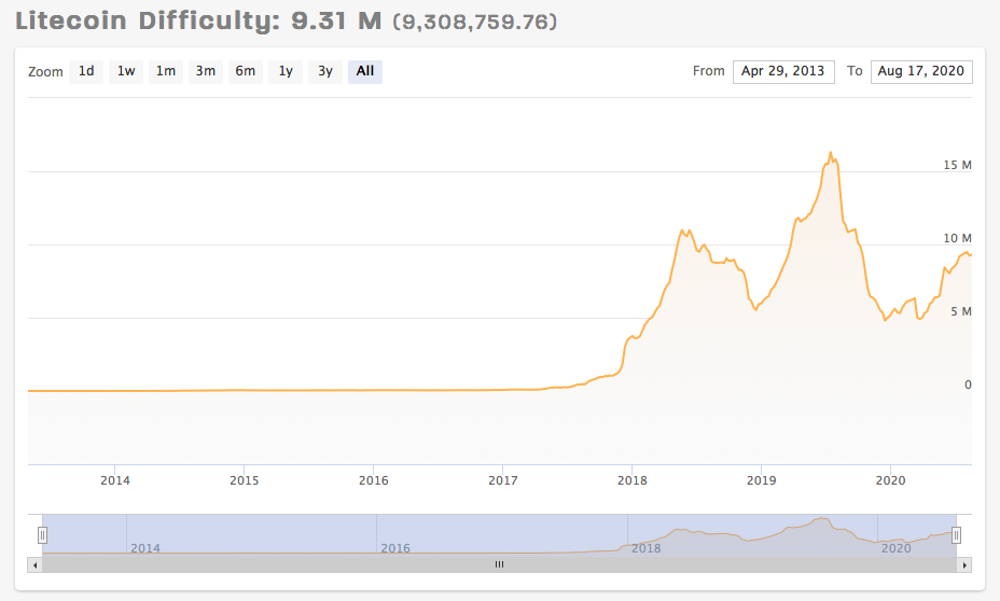 Litecoin mining has some advantages over BTC mining, but it is mostly unprofitable today. Cryptocurrencies are volatile by their nature and involve significant risk. Their market performance can hardly be predicted, and there’s no guarantee that mining Litecoin will bring you any profit.

Additionally, you should verify the legal status of cryptocurrency and crypto-related services in your country before making any decisions.