KIN and BitTorrent – the new players in the social media industry. 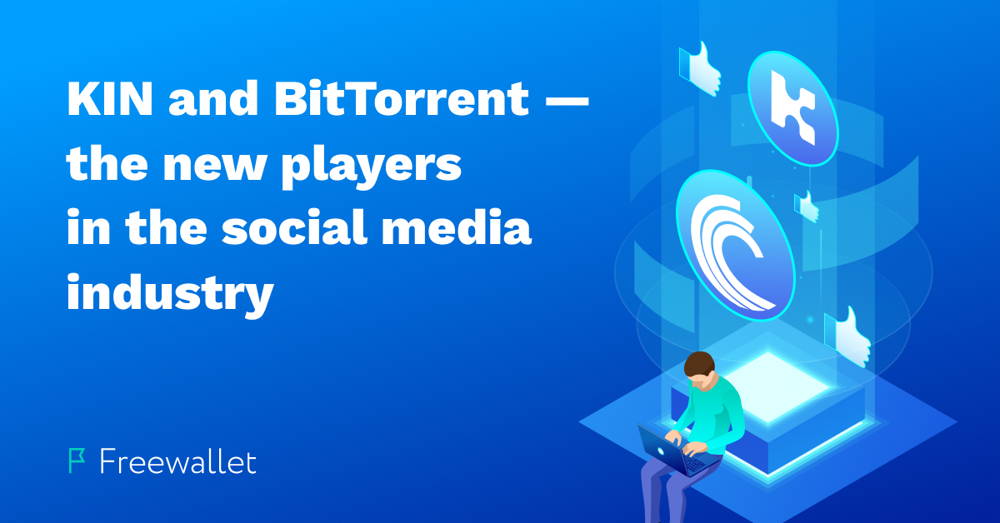 Everybody has heard about Steemit, the decentralized blogging platform. But today there are new players on the market offering their solutions to the social network industry. We will take a look at the new approaches by KIN and BitTorrent token and how they contribute to the social media sphere.

KIN coin is a brand new coin for Freewallet. It has recently migrated to the mainnet, swapping tokens for coins. The company is developing its own ecosystem which will include multiple applications for gaming, entertainment, and, of course, social media platforms. It already has 30 applications connected to the KIN network and more apps are coming. The company provides SDK for developers so it’s easy for them to join and use its solution.

The project started as the KIK messenger, which amassed a lot of popularity and has millions of registered accounts. The idea was to merge crypto with the messenger and reward content creators with cryptocurrency. There are thousands of channels with talented people. So you will be able to donate to your favorite blogger or bot developer with KIN.

Besides KIK messenger, KIN coin is used by several other social media platforms. One of the most interesting is Tapatalk. It contains more than 200000 forums with various topics, starting from threads dedicated to Apple products to a Volkswagen owners club. The KIN coin is used to reward content creators there too.

Another one is ThisThat application – a social polling system. Imagine, you found two pairs of nice sneakers in the store, but cannot decide which one to choose. You can make a poll on ThisThat and receive opinions instantly from all over the world. Users are incentivized with KIN cryptocurrency to get engaged in more polls.

Before the launch of the Telegram coin, KIN had already had quite a solid infrastructure with dozens of social media platforms. It could shape up to be the main competition for Tron token and it doesn’t seem that they plan to stop. The full list of applications and social media platforms which support KIN coin can be found on their official website.

Famous p2p sharing service BitTorrent has some plans to expand further following its acquisition by Tron Foundation. The company plans to revive their live streaming service, which was in operation from 2011 till 2017.

Today, BitTorrent Live has returned with blockchain technology and cryptocurrency micropayments. It will be similar to mobile streaming applications, where you can broadcast your life experience to people, or just chat with them live.

The competition in the market is significant. Besides, Instagram and Snapchat with their streaming features, there is TikTok which is disrupting the global market. It already has over 800 million downloads in app stores and millions of active users. However, these apps don’t yet offer their users the option of donating to live-streamers with money or cryptocurrency. BitTorrent has the chance to carve out its own niche and become very popular among the blockchain and cryptocurrency community.

BitTorrent Live app will be launched in several stages, starting with the beta test in Jun 2019. You can apply for beta testing on their official website now. Blockchain-based features will be added in the coming months to protect user privacy and to enable BTT payments. The company hopes to take the app to the public by the end of 2019.